Delegates of La Via Campesina, representing our organizations and movements, are gathered in the Basque Country to celebrate our 7th International Conference from the 16th to the 24th of July of 2017. Euskal Herria is a beautiful land of solidarity, struggle, and resistance, with its own language, where the tradition of good food produced by peasants and local fisherfolk remains strong. We, the peasants, rural workers, landless, indigenous peoples, pastoralists, artisanal fisherfolk, rural women and other peoples who work in the countryside around the world, declare that we feed our people and build the movement to change the world.

With the rise of financial capital, we are facing the unbridled monopolization of our water, seeds, land and territory. Dangerous technologies are being promoted, sometimes with irreversible impacts, such as GMOs, large-scale confined animal production, and synthetic biology. Driven by speculative capital, there is an accelerated replacement of real productive economies by the financial economy. Mega-mergers are concentrating corporate domination of the food system more than ever before. There is a new formula of neoliberalism combined with the discourses of hatred, in which the problems caused by this concentration of wealth are used to divide our peoples and create ethnic and religious conflict, and drive migration. We are facing a wave of human rights violations around the world, with comrades being assassinated, jailed, tortured and threatened.

Those who are grabbing resources make war on us, often through the WTO, the World Bank, the IMF, imperialism, free trade agreements and laws that privatize our commons, and increasingly also through bombing, military occupations and genocidal economic measures. We stand in solidarity with Palestine and other peoples who continue to suffer and resist against these impositions. Millions of migrants and refugees are being forcibly displaced by war and lack of access to the most basic needs. A cold wind of xenophobia, racism, religious fundamentalism and class hatred is being felt in many countries.

The criminalization of migration and social protest is linked to the power of the hegemonic corporate media that demonizes organized sectors of the population. The corporate media defends the interests of capital and lately they have pushed for the overthrow of some governments and the placing in power of others. They manipulate large portions of the population, creating the conditions for violations of human rights.

The capitalist and patriarchal system is not capable of reversing the crisis in which humanity finds itself, destroying our peoples and heating up Mother Earth. The Earth is alive, but capitalism is a disease that can kill her.

Confronted with this crisis of civilisation…

For more than half a century they have sold us the “green revolution,” which has been neither green nor revolutionary. Under the pretext of short-term productivity, this agribusiness model has poisoned the soil, monopolised and polluted water, cut down the forests, dried up the rivers and replaced our seeds with commercial varieties and GMOs. Instead of ending hunger, agribusiness has created more food problems, and displaced people from the countryside. It is a highly exclusionary model of agriculture without peasants. While agribusiness gets the subsidies and the favourable policies, in our peasant and indigenous agriculture we continue to do what we have done for millennia: produce healthy food for our families, communities and peoples. 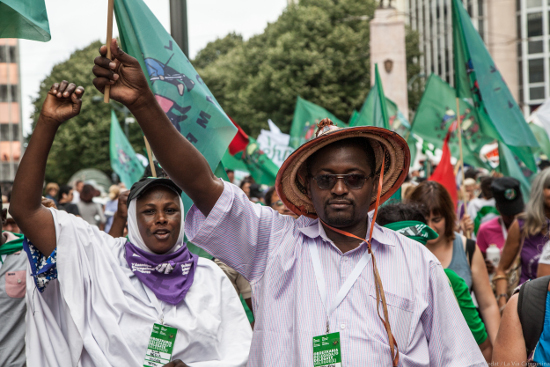 While governments impose seed laws that ensure privatization and guarantee profits for the transnationals, we care for our peasant seeds, created, selected and improved by our ancestors. Our seeds are adapted to our lands, where we use agroecological management to produce without the need to buy agro-toxics or other external inputs. Our peasant agroecology feeds the soil with organic matter, is based on biodiversity, and conserves and recovers peasant varieties of seeds and animal breeds, using the knowledge of our peoples and our Mother Earth to feed us. Its main source is the indigenous, ancestral and popular peasant knowledge that we have accumulated for generations, day by day, through observation and constant experimentation on our lands, shared later in our exchanges from peasant to peasant and between our organizations. Our agroecology has a peasant and popular character; it does not lend itself to false solutions like “green” capitalism, carbon markets and “climate-smart” agriculture. We reject any attempt by agribusiness to co-opt agroecology.

Peasant agroecology is the basis of our proposal and vision for the food sovereignty of the peoples of the world. In order to do so, we need to fight for genuine, integral and popular agrarian reform, the defense of indigenous and peasant territories, and the recovery of local food systems.

In addition to strengthening and developing our farmers’ markets, we need to build new relationships between the working people of the countryside and the city, new channels of distribution and marketing; and a new model of human, economic, and social relations based on respect, solidarity and ethics. We cool the planet and build just and more human societies with agrarian reform, peasant agroecology and food sovereignty.

2. We are building the movement:

Humanity in crisis seeks solutions. Increasingly, our movement is a seen as an example for peoples in struggle. La Via Campesina continues to grow and our proposal is strengthened. Though our enemies also grow stronger, and we face challenges to the continued advance of our movement building. 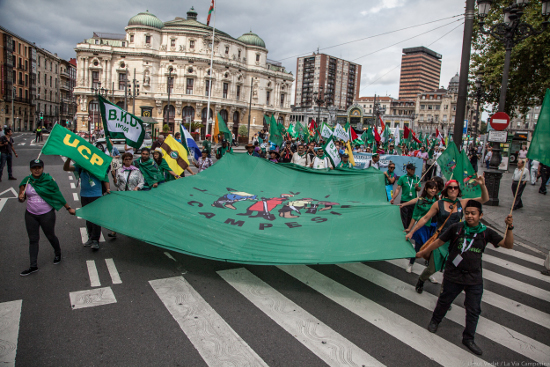 Mass struggle is the heart of La Via Campesina. The work of our organizations with their social bases must be strengthened, to include more rural workers, more peasants, more indigenous communities, more migrants, more African diaspora peoples, and more peoples affected by the capitalist, agro-hydro-extractive model. We need to strengthen alliances at the local, national and international levels, especially between the working classes of the countryside and the city.

Patriarchy is an enemy of our movement. The feminist character of La Via Campesina strengthens our unity and commitment to the struggle, with equality and gender equity. Key to strengthening our own organisations and achieving broader alliances is the construction of a peasant feminist movement within La Via Campesina. We will strengthen the political participation of women in all spaces and levels of our movement. We are fighting to end all forms of violence against women: physical, sexual, psychological, and economic. We are committed to increasing our capacities to understand and create positive environments around gender, within our organizations and in our alliances. The lack of tolerance for diversity is part of the process of dispossession of rural youth. A diverse, non-violent and inclusive countryside is fundamental for La Via Campesina.

Throughout the world, youth have been increasingly expelled from the countryside by the various forms of capital, and patriarchy and age discrimination restrict their visibility and full participation in our organizations. We are committed to the new generations in the countryside and in our movement, striving for the full incorporation of youth in spaces of leadership and decision making within our organizations, in training, and in the production of agroecological food.

Millions of us migrate as a form of resistance, so as not to disappear as peoples, as peasants, as women or as young people. We defy borders, tear down walls, and confront racism and xenophobia. We have built a movement joining peasants, rural workers and migrants, not as victims deserving of assistance, but as holders of rights, including our right to free movement.

Our work with our allies to achieve a United Nations Declaration on the rights of peasants and other people working in rural areas is of fundamental importance to hundreds of millions of people around the world. We will strengthen our work in our countries to achieve its adoption. This crucial instrument would strengthen the rights of the people of the countryside to protect their livelihoods and continue to feed the world.

We must continue to accelerate political, ideological, organizational, and technical training based on our own concepts, since we know that conventional education suppresses our identity and our ideas. Such training is crucial for our movements to create new and committed actors to forge our own destiny. In our struggle we also need to continue to create our own autonomous communications media, and build our alliances with the alternative media, to build awareness of our culture, our dignity, and our capacity to transform society.

The way is long. We are growing as a movement, but savage capitalism and war in a world system in crisis put all of us and our communities, organisations and societies at risk. Faced with barbarism we urgently need to build another future for humanity. In an extremely complex context, La Via Campesina is a driving force in the struggle for transformation and for peace in the world. Through our daily labour in the countryside, our production of food around the world, our alliances and our struggle for food sovereignty, we have won the trust of a large number of peoples and movements. We take on the responsibility to continue to sow peace on this planet, just as we have globalised the struggle and sowed hope in all corners of the world. 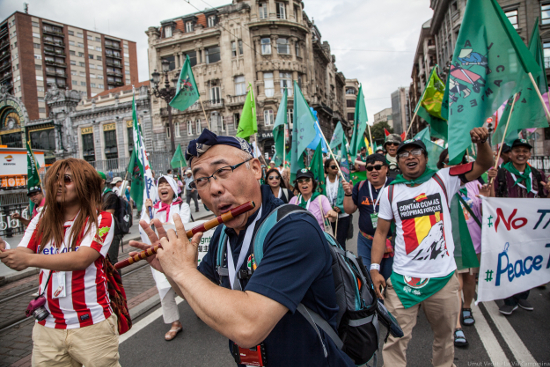 Very importantly our struggle has brought new recognition to the peasantry and changed the very terms of the global and national debates about food, agriculture and the countryside. No more will policies be formulated without peasant voices being heard loud and clear, or without peasant rights, agroecology, agrarian reform and above all, food sovereignty being on the table.

Growing and strengthening as a movement means paying attention to grassroots work, building alliances, fighting with conviction against patriarchy, imperialism and financial capital, with commitment and discipline. This struggle is critical to humanity and to the survival of Mother Earth. From Euskal Herria, we call on the peoples of the world to struggle together with us. It is time to build a more fraternal world based on solidarity among peoples.