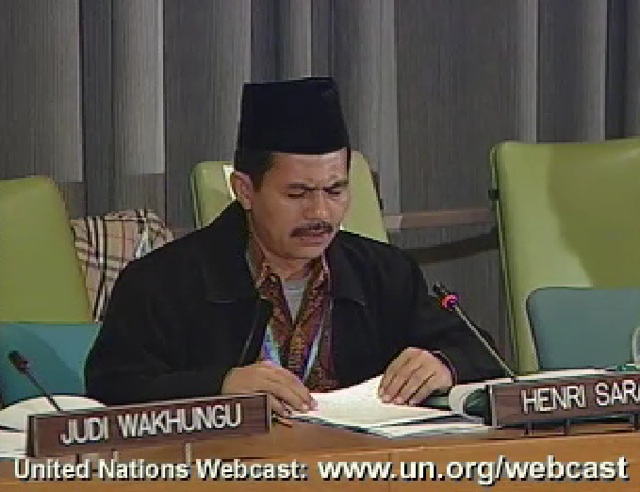 Watch the video on line

I welcome this Interactive Thematic Dialogue in our global effort in responding to the food crisis. Our dialogue in this chamber is of particular importance for those of us who believe that humankind has the courage and ability to make global governance work for all. Indeed, the food crisis gives us all an opportunity to do something without delay. The food crisis poses a massive threat to humankind. Everyday, significant parts of society around the world suffer directly or indirectly because of the food crisis. La Via Campesina, an international peasant movement, has been working to address the situation globally, with our members in 70 countries—this figure includes over 200 million members worldwide. Given the nature of our movement, undoubtedly the situation of peasants was put high on our agenda.

The role of the United Nations in making human rights mechanisms work is particularly important in this respect. I follow carefully how UN Special Rapporteur has progressively shifted the focus of the food crisis from a development-centered model to a rights based concept: a global food crisis is a threat to the right to adequate food. It was thus a historic moment when Mr. Olivier De Schutter emphasized this in the UN Human Rights Council’s session on the food crisis on May 22, 2008.. Mr. Olivier de Schutter further outlined this situation in a more elaborate way in the report to UN Human Rights Council, titled “Building Resilience: a human rights framework for world food and nutrition security” (A/HRC/9/23, 8 September 2008).

I also welcome the initiative of UN Human Rights Council in adopting the resolution on the right to food (agenda item 3, A/HRC/10/L.25, 20 March 2009) which has two significant points:

35. Acknowledges the work undertaken by the Advisory Committee on the right to food;

36. Requests the Advisory Committee to undertake a study on discrimination in the context of the right to food, including identification of good practices of anti-discriminatory policies and strategies, and to report on it to the thirteenth session of the Human Rights Council;

The three developments of these mandates include:

In light of the Special Rapporteur’s mandate and the work of the Advisory Committee, I would like to emphasize two points:

First, efforts on institutionalising the right to food. The mandate of the right to food as a thematic mechanism has been of particular importance in setting the standard for all national member states of United Nations. The number of member states who have adopted this standard into their own national mechanisms has increased. Mr. de Schutter recognizes this state obligation aspect in his speech today.

State obligation is instrumental in discussing the rights holder. At the national level, the rights holder is the citizen, including small farming households and rural agriculture workers—all of whom Mr. de Schutter refers to as being “food insecure”. This part of society has been particularly important in providing food in a more sustainable way, as the experience of La Via Campesina shows. In a country where the right to food is institutionalized, the state carries the burden of protection in searching for policy options and developing the right.

If the right to food is institutionalized through proper mechanisms, both under a legal and political framework, then, I believe, those who are “food insecure” would be empowered in responding to the food crisis. This, in the longer term, builds resilience and momentum.

Second, making the right to food work in international governance. Though it is not an easy and clear-cut situation, the result of the thematic mandate of the right to food, shifts the directions of the United Nations role on this issue. As we witness today, the right to food has been developing a set of standard which in turn has been adopted by many intergovernmental organizations as a policy option and legal framework. The significant issue for us today is how to build a responsive way of governing.

The study, recommendation, and all forms of deliberation on the right to food took a long time to become the framework for international governance. Crisis often happens when we let what we allow the forseeable to happen–this was a case of bad governing practice.

These two emphases, I believe, would make our efforts in responding to the food crisis more meaningful –not only in the long term, but also in the short term.