Bonn (Germany), November 9, 2017 : Peasants, small farmers and Indigenous peoples ‘feed the world and cool the planet.’ This is what the global peasant movement, La Via Campesina, has come to Bonn, Germany, to put onto the agenda at the COP23 climate meetings — both in the official space and at the People’s Climate Summit where social movements met to strategize for alternatives to capitalism and its climate crisis.

According to ETC Group, peasants and Indigenous peoples are the sole food providers for 70 percent of the world’s population, and they use only 30 percent of the earth’s natural resources to get all of the food to the table.

“No chemical has ever touched our soil. We have held onto our traditional seeds which withstand many of the climate challenges we are facing”, explained Michaelin Sibanda, a young peasant from Zimbabwe Smallholder Organic Farmers Forum (ZIMSOFF). “We know that, to have healthy food and healthy ecosystems, we need to have healthy soil.”

The principles of agroecology help to conserve water, soils and seeds. But, for La Via Campesina, agroecology is also political: “It is proven that there is resilience in agroecology, and resilience is also resistance — it relates to the way we organize collectively and bring together concrete proposals for change that are sustained by work and struggle in our different territories,” explained Jesús Vázquez, a young organizer and activist from the Organization Boricuá of Agroecology in Puerto Rico. In September 2017, Puerto Rico was devastated by two, back-to-back hurricanes which severely undermined all aspects of life on the island, including food production. Vázquez continued,

“In the context of these hurricanes, we have witnessed that agroecological practices are more resistant to extreme weather phenomena, they bring resilience. Many roots and tubers, have pulled through the disaster. Many peasants and farmers are already back in the fields planting and cultivating despite the fact that the Secretary of Agriculture says that agriculture is completely devastated throughout the island. We are here to remind governments that the change must be systemic.”

La Via Campesina and their allies’ proposals for addressing the climate crisis get to the root cause of the problem — corporate control over decision-making and the resulting processes of land and water grabbing, peasant criminalization and human rights abuses in the transnational supply chains used to produce food. “At the climate negotiations, governments are putting forward false solutions. We call them false because these proposals do not bring real change but, rather, bolster corporate profits,” said Fanny Metrat, from the French peasant organization Confédération Paysanne. “Carbon markets, geoengineering, so-called climate smart agriculture are being promoted by the same people who are also promoting emission-intensive livestock production and an export-based industrial agriculture which requires massive amounts of fossil fuels. It is a big contradiction,” she explained.

At COP23, these contradictions are becoming clear. The German government, a big promoter of green economy, has positioned itself as spearheading efforts to address climate change while also expanding the production of coal—the dirtiest fossil fuel on the planet. The international delegation of La Via Campesina members joined the over 4.000 people strong Ende Gelände (‘Here, and No Further’) march and civil disobedience action against Germany’s largest mining company, KWE, strengthening the message that the most important action to address climate crisis is to keep fossil fuels in the ground.

Bernd Schmitz, from the Arbeitsgemeinschaft bäuerliche Landwirtschaft (AbL) the farmer member organization of La Via Campesina in Germany, underlined the need for changes in Germany. Speaking to journalists, Schmitz said,

“The consequences of global warming are felt all over the world. In Germany, we have had extreme droughts in some regions and extreme rains in others. This year, because of severe hailstorms, we lost nearly all fruit production in some areas of Germany! The government is too slow to respond to the problem. The AbL contends that smallholder agriculture, which includes a localized food chain and ecological food production, helps to solve the problem. This system uses less fossil energy, reducing the emission of dangerous greenhouse gases. Small farmers around the world urgently need support to feed people and maintain their livelihoods in the context of climate change.”

La Via Campesina has been joined by other frontline communities, including from within the It Takes Roots delegation of impacted communities based in the United States and also the fisherfolk and peasants within the Global Convergence for Land and Water Struggles. A representative of the West African contingent of the Convergence, Massa Koné, from Mali, was clear about the importance of working with allies to address climate change and multiple injustices: “As grassroots organizations, we have similar perspectives on the problems and what we need to do about them. La Via Campesina allows our communities to be heard. Our call for system change is urgent because the damage is growing. Commons, including land, forests and water, must be protected and restored to the people. We need to work together with our allies to be prepared for climate change.” 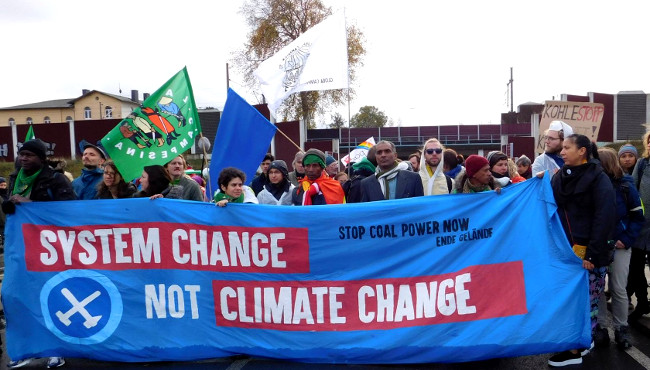