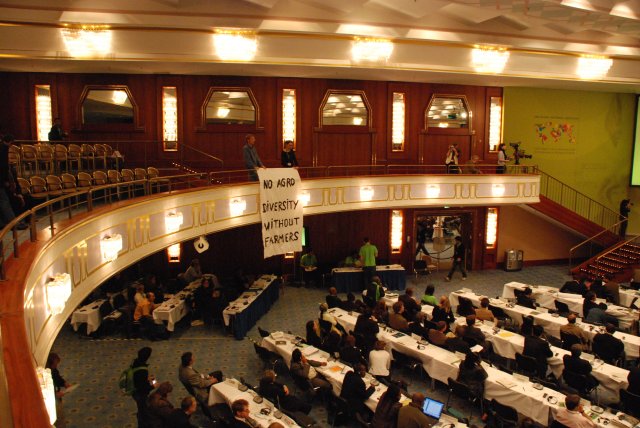 The Via Campesina action was just after the message from the Secretary General of the UN, Ban Ki-moon, to the delegates of the Convention. The banners read “No Agro-Diversity? Without Farmers” and “No Food For Fuels”.

Members of Via Campesina were applauded by delegates when they chanted “nature for people, not for business”. After a few minutes the banners were removed by security and the people holding them were escorted out of the Maritim Hotel, and their accreditation to the COP was cancelled.
Prior to the banner hanging action, members of Via Campesina and their supporters disrupted an industry lunch with a play which depicted agro-industrialists congratulating each other for their excellent work at monopolizing the farm seeds and destroying agricultural biodiversity.

The side event following the lunch was sponsored by all the Gene Giants, Agribusiness and The International Federation of Agricultural Producers.

Via Campesina is sounding an alarm bell about the corporate interests which are advocating for a new Green Revolution in Africa as a strategy to increase productivity. Although agribusiness uses concepts such as “sustainability”, “participation” and “biodiversity management”, the production models proposed are the same as those which have created the present crisis and the rapidly increasing loss of biodiversity.

According to Via Campesina, supported by many others present at the COP, small-scale famers are key to eradicating both world hunger as well as developing and safeguarding the world’s biodiversity.

Small-scale farmers, in contrast, have the ability to feed the world. Peasant agriculture promotes agricultural biodiversity, sustains traditional cultures and protects the environment. Moreover, small-scale, local and agroecological production is an effective and immediate way of reducing carbon emissions and cooling down the planet.