Against the criminalisation and repression of social protest 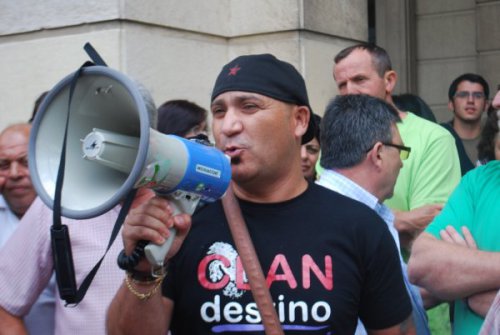 From the SOC-SAT (Union of Agricultural Workers-Union of Andalusian Workers) we ask for urgent collaboration in our campaign to collect signatures for the plea for remission of Andrés Bódalo’s sentence. He has been jailed for his participation in an act of social and trade union protest.

Andrés Bódalo has a long history as a social activist. Added to his dedication as a trade union leader, participating in innumerable actions in defence of labour and social rights, is his political vocation. He is councillor for Jaén en Común, a group for change, and headed the list in Jaén for Podemos in the general elections. Andrés was convicted in a farcical trial where documentary evidence (videos) and testimonies (statements from the Guardia Civil), which prove his innocence, were not admitted by the judge.

On March 30th he was detained and incarcerated in Jaén prison. His family presented the plea for remission. Andrés is innocent; another victim of the campaign of repression that has been used for years against social movements in general and particularly against SAT, bowed down under the weight of a million Euros in fines, and with 650 accused for whom 446 years of prison sentences are contemplated.

Individuals and organizations can sign the manifest / statement / petition for the liberty of Andrés Bódalo here: http://www.indultobodalo.info/

Send statements of solidarity and support to the following addresses: <internacional.socsat@gmail.com> <sober.alim.sindicatoandaluz@gmail.com>

“For his defence of the agricultural workers of Andalucia; for his untiring struggle for land rights against the large estates and agrobusinesses; for his commitment to immigrants; for bread, work, housing and a decent wage for all who live in Andalucia, and because those in power know that he will never give up and will continue to denounce injustice and exploitation. For all these reasons our comrade, Andrés Bódalo, of the trade union SOC-SAT (Union of Agricultural Workers-Union of Andalusian Workers) – La Via Campesina, has been sentenced, because of a collective protest four years ago, to three and a half years in prison. Andrés, like so many other members, is victim of a judicial set up which uses the politics of social repression to criminalize the labourers’ legitimate protests.” (extract from La Via Campesina declaration for the freedom of Andrés Bódalo).