(This post was first published on 17 April 2020 and is reproduced again, as some readers requested it.)

La Via Campesina is marking this day by releasing an illustrated version of the UN Declaration on the Rights of Peasants and Other People Working in Rural Areas (UNDROP). We dedicate this work to more than a billion people living in rural areas, who exist and resist the assault of global capital. It remembers the martyrs who lost their lives and livelihood in the struggle to protect their land, the seeds, water, and forests. It defends the rights of peasant women and people of diverse identities in every corner of this world.

This land, this water, this forest – this is us!

It is a crisis of civilisation that has been brewing for hundreds of years. At the core of it are a few “people” [1], who today own and control over half of the global wealth. They exploit both nature and humanity for profit, with impunity. The consequences of their actions are telling. At the time of writing this note, a majority of the world’s people are living under lock-down. COVID-19 and its impact fill all the public and private conversations everywhere. As governments scramble to arrest the spread of the virus and save their citizens, the economic fallout from this crisis threatens to derail the lives and livelihoods of billions of people.

The virus has spared no one. However, urban and rural workers, migrants, peasants and indigenous people – a majority of whom do not have access to quality public healthcare – are among the most vulnerable, just as the elderly and people with pre-existing health conditions. The health scare alone is not the worry here. In many parts of the world factories are laying off workers, and governments are shutting down rural and peri-urban peasant markets. As strict quarantine measures come into effect, small-scale food producers are unable to trade their produce; fishers are unable to venture into the sea, pastoralists are unable to rear their cattle, and indigenous people restricted from going into forests. As a result, the world is soon going to face increased hunger and poverty – perhaps several times more severe than what we have already witnessed in the last two decades. Meanwhile, States with dictatorial tendencies have found an opportunity in this crisis, by legitimising mass surveillance, eroding democratic processes and gradually breaking apart freedom of association and organised dissent.

HOW DID WE COME TO ALL THIS?

Arguably, COVID 19 is not a problem in itself, but merely a symptom.

The human race was already living on the edge, with Greenhouse gas (GHG) emissions at a record high and the earth heating up at unprecedented rates. In 2019, United Nations Intergovernmental Panel on Climate Change (IPCC) had released a report titled “Climate Change and Land” [2], which once again exposed the devastating impact that industrial agriculture and industrial livestock systems have had on land, forest and water – and to GHG emissions. A few months after the launch of the IPCC report, forest fires were raging across the Amazon, Australia and Central Africa – reminding us of the eerie frequency with which extreme weather conditions occur in this century. Just as big farms and transnational agribusinesses put a massive strain on earth’s finite resources; they were also putting the health of all life forms, including humans, at huge risks. Several documented studies have by now, revealed how influenza and other pathogens emerge from an agriculture controlled by multinational corporations.

But this agro-industrial complex was not built in a day.

The most significant enabler of this system has been capitalism and the neo-liberal economic policies, which allowed for its free expansion. Driven by human greed and enabled by powerful corporate interests – advocates of capitalism replaced nature with factory bricks, chimneys, and industrial greenhouses. They built cities as the engines of economic activity, with scant regard for the planet’s biodiversity. While doing so, they neglected the villages, the coasts, the forest, and the people who lived there. They cut trees to set up large plantations or luxury resorts for wealthy tourists, and drilled the earth for minerals. All the while, dispossessing millions of people who co-existed with those surroundings. A singular model of industrialisation was imposed upon the world’s people by a select few. Those who resisted it were ridiculed, persecuted, imprisoned, and sometimes killed with impunity.

Since the mid-twentieth century, ably supported by institutions such as the World Trade Organisation, the World Bank, and the International Monetary Fund – transnational corporations and their friendly governments signed agreements that disregarded the human cost of industrial expansion. The promoters of globalisation framed Free Trade Agreements that encouraged the privatisation of public services and deregulation – eventually crumbling public health systems and pushing rural and urban communities into extreme vulnerabilities.

All the big flu that struck humanity in recent times remind of the human cost of this unhindered expansion in the direction of homogeneity at the expense of diversity. Deadly pathogens mutating in, and emerging out of, these specialised agro-environments is the consequence brought about by a system, which replaced the local production of healthy, diverse, and climatically appropriate food with factory-produced homogeneous food that tasted the same in the far west and far east.

Governments paid little heed to the repeated warnings from social movements and civil society. As capitalism expanded, the news about peasants, fishers, pastoralists, artisans, and many other people working in rural areas disappeared from the dominant daily narratives. Capital’s invasion of the countryside brought a world marred by civil wars, distress migration, unhealthy surroundings, and angry people. People’s response to such trying circumstances is not always a pleasant one. In many parts of the world, frustrated people have started finding refuge in right-wing ideologies that draw its strength from hatred, parochialism and division. It is essential to recognise that suspicion and hostility of one another, emanates strongly in a world where one has to scramble for resources and daily wages. Capitalism created this polarised world, where competition replaced solidarity.

Though, all hope is not lost. A push-back from people, led by those most affected by these crises and riding on the strength of internationalism, solidarity and diversity, can dismantle capitalism and give us back the world that is socially just and equal.

Since 1993, through La Via Campesina, millions of people living in rural areas have been warning the world of the shipwreck that was coming.

After a decade of agitations and struggle to counter the expanding reach of global capital, La Via Campesina proposed and started campaigning for an international legal instrument that defends people’s rights over their territories, seeds, water, forests. For seventeen long years, peasants, workers, fishers and indigenous people from Asia, Africa, Americas, and Europe patiently and persistently negotiated inside and outside the United Nations Human Rights Council, sharing their stories of dispossession and despair. This process of negotiation catalysed the movement’s cadre and enabled them to campaign more forcefully. Allied non-governmental organisations, other food producers social movements, academicians and progressive governments also contributed to building a momentum, which favoured the establishment of an international legal mechanism.

The core of the Declaration centres on the right to land, seeds and biodiversity, as well as several ‘collective rights’ anchored in Food Sovereignty. Food Sovereignty is the peoples’ right to determine their food and agricultural systems and the right to produce and consume healthy and culturally appropriate food. Aside from having a unique article devoted to their obligations, the UN Declaration also establishes in each article, a series of obligations and recommendations for member states. These articles in the Declaration explain not only the rights of peasants but also the mechanisms and instruments for states to ensure them.

The onus now lies upon the member states of the UN, social movements, and civil society in every corner of the world to adapt and implement this Declaration in different national contexts.

The Book of Illustration that we present here explores the several aspects of this UN Declaration.

Through compelling visuals that were carefully crafted by Sophie Holin, a young activist and supporter of La Via Campesina, this book aims to popularise the contents of the UN Declaration and spread awareness about it among rural communities. The book, originally produced in English, Spanish and French, will also be available as an open-source document for social movements to adapt and translate into local languages.

As La Via Campesina, we must use this tool to mobilise communities and organise political training. It is essential to use the Declaration in legal procedures in defence of peasants and to call on society to develop regional and national strategies aimed at implementing this UN Declaration. This tool allows us to pressure our governments and governance institutions at all levels, to fulfil their obligation of ensuring the dignity and justice for those who produce to guarantee people’s food sovereignty. 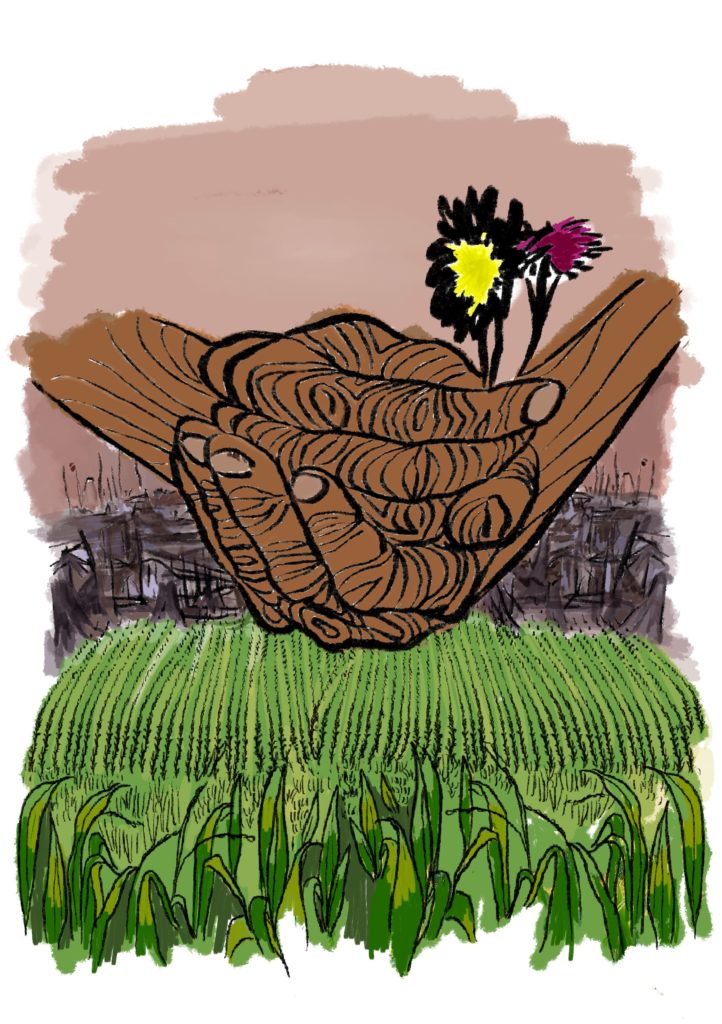 The book, originally produced in English, Spanish and French, will also be available as an open-source document for social movements to adapt and translate into local languages.

Solidarity among rural and urban people, peasants and workers, food producers and consumers is our only weapon against global capital. Educating our people and the formation of our rural youth is central to our struggle. Let us reclaim the world that capitalism has brutally snatched away from us. Let us insist that this land, this water, this forest is nothing but us, our life. This book is just a tool in this larger struggle in defence of life. Forward, we go!

[1] Mostly men: according to Oxfam 2017 report, eight men owned the same wealth as the 3.6 billion people who make up the poorest half of humanity. https://www.oxfam.org/en/research/economy-99 (link is active as on March 31, 2020)