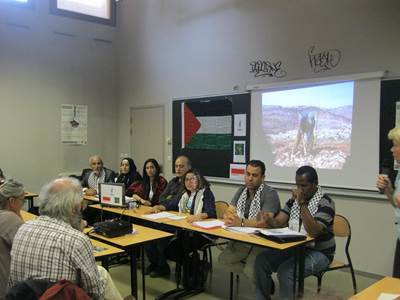 (Ramallah, Palestine)- a delegation from the Union of Agricultural Work Committees (UAWC) participated in the European Summer School for Social Movements in France. The delegation presented a workshop titled “struggle for food sovereignty” funded by Rosa Luxemburg and in partnership with La Via Campesina.

UAWC’s delegation, that consists of members of the agricultural committees as representatives of the board of directors, and employees, met with a members of La Via Campesina France and provided them with an overview about the general situation of the farmers in Palestine within the Israeli occupation that violates the farmers’ rights through imposing checkpoints, the apartheid wall and control of resources. The delegation also had several talks in three major workshops in the European summer school; workshop on Palestine, BDS workshop, and food sovereignty workshop.

The delegation had a workshop to discuss the study “Impacts of the Israeli occupation’s violations on the Palestinian climate change adaptation mainly in area “C” of the West Bank” within “Struggle for Food Sovereignty” as an Orientation on Adaptation to Climate Change Impacts project that is funded by Rosa Luxemburg Foundation and implemented by UAWC. The study discussed the climate change adaptation in twenty-three Palestinian communities that fall within Hebron, Bethlehem, East Jerusalem, Jericho and Tubas.

It is important to note that around 40 activists from different countries have signed a position paper: http://uawc-pal.org/articleen.aspx?ano=1107, to support the Palestinians’ right of food sovereignty.