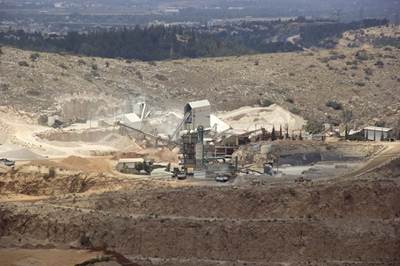 KLP excluded Heidelberg Cement and Cemex on the grounds of their exploitation of natural resources in occupied territory on the West Bank through investing in the construction of quarries. The quarries pay regular fees and royalties to the state of Israel, via the Civil Administration, in order to keep operating. The products deriving from the quarries are used primarily in the domestic Israeli market. In KLP’s opinion this activity constitutes an unacceptable risk of violating fundamental ethical norms.

Stressing on the civil society’s role in supporting Boycott, Divestment and Sanctions (BDS) campaign, UAWC’s legal unit followed up the case of the farmers’ affected from the companies in Az-Zawyia Village in the Governorate of Silfit and gathered the needed information to pressure KLP to exclude the companies – that violate the Palestinian right to their natural resources – from their investment portfolios.

HeidelbergCement is one of the world’s largest suppliers of building materials, including aggregates. The company is based in Germany, and has operations in 40 countries. In 2007, HeidelbergCement acquired the British company Hanson plc, which has a wholly owned subsidiary, Hanson Quarry Products Israel Limited, with operations on the West Bank. Additionally, Cemex is a global supplier of building materials. The company was established in Mexico, and now operates in more than 50 countries. In 2005, Cemex acquired RMC Group plc, which at that time was already established on the West Bank via a subsidiary.

It is important to note that both the Hague Regulations and the Fourth Geneva Convention prohibit the Occupation to extract to the natural resources of the occupied territories.