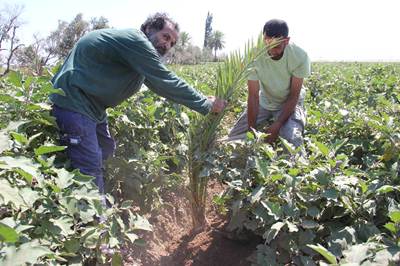 (Palestine, Marj Na’jeh, April 2015) The Union of Agricultural Work Committees (UAWC) distributed 354 palm saplings to be planted on 25 dunums for the farmers of Marj Na’jeh community in the Jordan Valley, in addition UAWC distributed irrigation networks and natural fertilizers to the farmers. This activity is within “Struggle for Land: defending Palestinians’ right to access their land in the Jordan Valley” project funded by Medico Internationals.

The project’s coordinator Dr. Moayyad Bsharat explained that the project provides job opportunities for Palestinian workers to work on their land rather than in the Israeli settlements. The project aims to support the steadfastness of the farmers in the Jordan Valley area by supporting the cultivation of sustainable crops such as palm cultivation. Moreover, the project aims to cultivate crop varieties that bear the water and soil salinity, which generate income and work towards the sustainable development of the beneficiary families.

The coordinator of the Jordan Valley agricultural committee Nasr Bani Odeh stressed that the farmers in Jordan Valley need all sorts of support to strengthen their resilience on their land, especially with the uprising Occupation’s violations. Bani Odeh noted that UAWC has implemented several developmental projects in the Jordan Valley.

It is important to note that 62% of the total population of Marj Na’ja community consists of refugees. The community is 500 meters away from the security line, which confiscated since 1948 more than two-thirds of the land area in the demarcation of the border between “Israel” and Jordan.