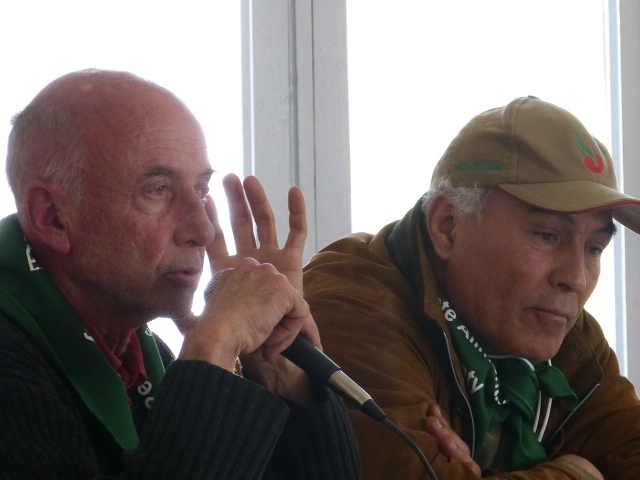 The Experience of La Via Campesina at the WSF

On the morning of the final day of the World Social Forum in Tunis, held in from 26th to 30th March 2013, La Vía Campesina delegate Mohammed Hakech , from Marocco, was the final speaker at a session challenging the dominant discourse of migration.

Hakech was joined on stage in Amphitheatre 6 by other three speakers, each one of which drew on their experiences from three continents to examine the causes and consequences of migration in the context of global inequality and the intense pressure facing farmers.

The dominant view of migration, to the European Union, is that it is a threat from masses of foreign invaders. One illustration is an EU television spot on migration and Europe’s relationship to neighboring countries which features Kill Bill’s Uma Thurman fighting off assaults by a succession of crude racial stereotypes: an Asian ninja, an Arab sultan, and also an African warlord.

But the reality, when it is seen from below appears very different. The threads of migrations are closely and inevitably linked with those of of privatisation, industrialisation, and the creation of a globalised markets which gives little or no hope to the ‘wrecked of the earth’. Awa Djigal, from Senegal, and Nandini Singagowda, from India are two peasant women fighting against the destruction of small-scale farming. Their respective homes are far from each other, but their experiences are united by common suffering of peasants forced to abandon their land under pressure from land grabbing, expansive agrobusiness, increasing costs of production, and unfair competition with subsidised imports from abroad – and that’s without mentioning the growing challenge of climate change.

Since the imposition of structural adjustment plans in the South in the 1980s and 90s – cutting back social spending, dropping tariff protection for domestic goods and prompting the privatisation of key public assets – the economic, social and cultural existence of peasants has been under continuous attack. Peasant families have lost public support and been left exposed to harsh conditions.

Peasants are forced off their land and then invited back under new conditions as farm workers, the cheap labour which is fundamental to agrobusiness and its large-scale farms. In a process of modern proletarianization, farmers lose their autonomy and independence, and become employees of the new latifunda, completely dependent on the will and power of their employer, stressed Mohammed Hakech.

In other cases, men are forced to leave their wifes, families and land behind to look for opportunities elsewhere, whether in the cities or in foreign countries that can be reached only after expensive and dangerous boat trip.

The transformation to industrialised or oil-based agriculture represents a move towards the complete dismantling of rural society. As reported by Nandini Singagowda, more than 200,000 small-scale farmers in India have committed suicide; in many of these cases, men are driven to kill themselves by drinking the same pesticides and fertiliser that have been first transformed into an essential input by the Green Revolution, and then have rendered economically inaccessible by the oligopoly of transnational enterprises. At the same time, the women who remain behind in the rural areas with little or no income, often enter into the vicious circle of prostitution, another plague of modernity which is seriously compromising the social cohesion of villages.

Nicolas Duntze, a leader of Confederation Paysanne, member of la Via Campesina in France, filled out the picture by describing the situation facing thousands and thousands of migrant workers who toil in the tomato farms in the south of Europe, where they are underpaid and do not receive the proper legal protection. Many come from Africa, but increasing numbers are from the new European Union members, seasonal labourers who represent a challenge to the traditional mechanisms of union protection as the power of agrobusiness sucks them into a continuous competition for even these poorly paid jobs. And this is without speaking of the cases of racism and discrimination against women experienced on a daily basis.1

The global network of more than 200 million farmers united under the umbrella of La Via Campesina seeks to become an instrument of resistance against the consequences of industrialization and a source of alternative forms of production.

Farmers from the global North and South alike will have to combine their struggles, because their suffering has common roots which can only be eradicated through collective action.

Farmers from old and new European countries need to cooperate and create a strong network in defense of their uniqueness and future, and the same strong relationship has to be created between the Global North and the South. However, the strongest pressure has to be exercised in core countries, which represent the centers of economic and political power whose decisions can make a difference beyond their territorial borders. The global alliance of peasants and small-scale farmers represented by La Via Campesina has to be reinforced, and its power utilized to obtain a counter-transformation of the economic and social framework. The abandonment of exploitative industrialization and of its exclusionary practices represents, in fact, the only way to guarantee the respect of the people and the environment.

“Movement is a key component of human nature. The current concept of Migration is a construction of modernity: from something natural migration has been transformed into a crime, a legal fiction which forces our brothers and sisters into a deadly race to the bottom, and that provides agribusinesses with the cheap labour that they need.”