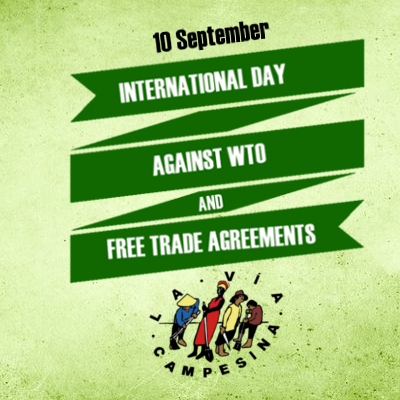 On September the 10th, the International Day of Action Against WTO, La Via Campesina, the International Peasant Movement that brings together over 200 million peasants from 164 member organisations in 73 countries, commemorates the death of Lee Kyung Hae and continues to struggle to END WTO.

Last year in Kenya, Nairobi at the 10th WTO ministerial meeting trade negotiations had to be rescued on the last hour to save face as WTO sought to reinvent and seek legitimacy in Africa. WTO members held their first informal meeting of agriculture negotiations post the Nairobi meeting on 8 March this year to discuss the way forward on agriculture talks. We must increasingly mobilise to END WTO and to leave agriculture out of the WTO as they prepare for the 11th ministerial meeting in 2017.

On this 13th anniversary of Farmer Lee Kyung Hae’s martyrdom, we reject the bilateral and multi-lateral Free Trade Agreements that are anti-people, anti-democracy and that which threaten people’s control over their own resources. His words continue to ring true “My warning goes out to all citizens that human beings are in an endangered situation. That uncontrolled multinational corporations and a small number of big WTO Members are leading an undesirable globalization that is inhumane, environmentally degrading, farmer-killing, and undemocratic. It should be stopped immediately. Otherwise the false logic of neoliberalism will wipe out the diversity of global agriculture and be disastrous to all human beings.”

The free trade agreements such as the Comprehensive Economic Trade Agreement (CETA), Transpacific Partnership (TPP), RCEP are designed to benefit big corporates while killing millions of family and smallholder farmers. Since the adoption of FTAs we have witnessed drastic decline of numbers of peasant farmers as their local markets and farmland are taken over by big corporates. Mother nature has not been spared either as FTAs compromise environmental protection and animal welfare. Food safety too, affecting peoples’ health. Moreover, FTAs through contentious Investor-State Dispute Settlement (ISDS) mechanism erode state sovereignty and leave them at the mercy of big transnational corporations (TNCs). We call upon our governments to commit to build robust public and institutional procurement programs which allow farmers to access to stable, participatory and remunerative markets for farm produce.

The controversial Transatlantic Trade and Investment Partnership (TTIP) deal between the EU and US is falling apart as negotiations have all but stalled. This is significant step in our mobilisation against FTAs and an opportunity to expose more their fallacies and bring an end to such deals.

Farmer Lee wasn’t just anybody. He had founded a cooperative and farmers’ association in Korea, served as a state legislator, and had been recognized by the government of Korea and by the United Nations as an outstanding farmer. Yet he lost his land, as did millions of other Korean farmers, after his government signed the General Agreement of Tariffs and Trade (GATT) in 1992, the predecessor of the WTO.

We call upon, on this day, our member organisations, allies and social movements of the world to mobilize against the neoliberal agenda of the WTO which promotes corporate power over humanity. We must continue to struggle to build a world based on food sovereignty.