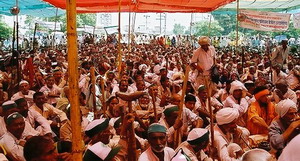 Chowdhary Mahinder Singh Tikait, President, Bhartiya Kisan Union today urged the Chief Minister of Uttaranchal, Mr Narain Dutt Tiwari, to declare the state “GM Free.” Leading a delegation of the “Kissan Kumbh” that concluded at Haridwar today, Mr Tikait met the chief minister at Dehradun. Complimenting Mr Tiwari for his “vision’ to declare Uttaranchal as organic state, Mr Tikait said that the organic status can only be preserved if genetically modified crops and foods are not allowed in the hilly state. “I am very hopeful that Mr Tiwari will see through the design of the GM industry, which is keen to contaminate the environment and is not at all concerned at the risk such crops and foods pose to human and animal health.”

He told the chief minister of the likely introduction of Bt brinjal, the first genetically modified food crop that is awating approval large-scale field trials. Bt brinjal poses erious health concerns for the nation, he warned.

The annual convention “Kissan Kumbh” of Bhartiya Kissan Union, which ended at Haridwar today resolved that India does not need GM crops. 30,000 farmers have congregated for the 3-day Kissan Kumbh from the states of Punjab, Haryana, Rajasthan, Uttar Pradesh and Uttaranchal.

Mr Tikait strongly rejected GM seeds in Indian agriculture and demanded that the government at least allow Indians to eat safe food, without GM. “The Indian government is becoming anti-farmer in every way in any case – now, it wants to feed Indians with poison in the form of Bt crops. How can we accept this?”, he said.

Speaking at the “Kumbh, Mr Devinder Sharma, noted agricultural trade policy analyst said: “The real need for such crops comes from the seed industry which wants to secure more and more markets by selling these seeds to farmers at expensive prices – otherwise, it is inexplicable that the government wants to allow a Bt Brinjal crop in the country, despite the fact that there is no apparent need for it”.

The farmers in delegation and other speakers from states like Andhra Pradesh, Madhya Pradesh, Maharashtra etc., shared the bitter experience with Bt Cotton in the country.

“We are being asked to produce more using such technologies. Will the government then guarantee the farmers that their increased production will be procured by it? This is especially relevant to ask in a situation when despite using GM technology, American farmers are having to be propped up by different kinds of subsidies. Will the Indian farmers be guaranteed similar support then?”, asked Shri Vijay Jawandhia of Shetkari Sanghatan, Maharashtra. “The Indian government should learn from the bitter experience with pesticides that it is not enough to promote a product as being safe without adequate tests or without a precautionary approach. It should have the vision to promote right and sustainable technologies that put the control in the hands of Indian farmers over their agriculture”, added Shri Yudhvir Singh, Bhartiya Kissan Union.

Farmers attending the convention decided that they will send their protests to the Prime Minister through the district administration on July 10. There would be a massive education campaign launched with farmers in all villages about the various hazards of GM crops including Bt Brinjal, it was decided.