In a show of gratitude and solidarity to the innumerable struggles led by Shri K S Puttannaiah, the iconic peasant leader of Karnataka Rajya Raitha Sangha and Green Brigade, thousands of farmers from the state brought sacks of soil to dedicate it to him as he is being laid to rest. 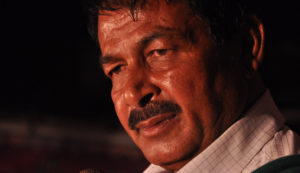 Shri KS Puttannaiah’s funeral is being held on Thursday 22nd February 2018 in his native village Kyathanahalli, Pandavapura Taluk, Mandya district at 10.30 am.

In a statement issued by the peasant movement and the Green Brigade, they have recalled their beloved leader as a son of a soil, a rationalist, a humanitarian and a peerless activist. In a notable act of rationality, the funeral and the subsequent ritual 12 days later, will be deliberately devoid of any religious rituals and is instead being marked by planting a sapling seed.

The statement also noted that the funeral procession started at JSS Dental College, Mysuru at 6 am and traveled through Srirangapatna, Pandavapura Town (via Elekere) and arrived at Kyathanahalli village.

Farmers from different parts of the State, mainly the old Mysore region, were expected to reach Kyathanahalli to attend the funeral. Over 5,000 farmers from the northern parts of Karnataka were expected to reach by Wednesday midnight. Accommodation are being provided at local school buildings, temples, and premises of ‘aalemane’ (traditional jaggery making units) and rice mills, according to news reports quoting KRRS sources.