Home » The WTO should be buried! 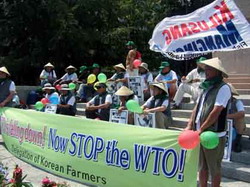 The WTO has collapsed! This is the message that La Via Campesina brought to the WTO headquarters in Geneva on 26 July 2006. The delegation consisting of 17 korean farmers (Korean Peasant League, Korean Women Peasant Association and Korean Catholic Farmer Movement) and of farmers from Galicia-Spain, India, Nepal, Indonesia, Mozambique was joined by firsherfolk from the Philippines, Thailand and South Africa. When they heard about the suspension of the WTO negotiations, they went to Geneva to demand for permanent abolition. The WTO should definitely be buried.

Wearing Asian farmers hats and wearing green Via Campesina bandanas they protested just in front of the main entrance of the WTO building. They brought a balloon with “WTO” written in bold letters and they blew it up to symbolize the final collapse of the WTO.
Henry Saragih, general coordinator La Via Campesina said, “We demand the complete abolition of the WTO. Now it is time to think about alternatives, and La Via Campesina has been promoting food sovereignty since 1996. It is the alternative that farmers proposed to improve their livelihood and put an end to poverty”.
La Via Campesina will organised and participate to more activities in the coming days, such as the land parade on July 27 and a public debate on food sovereignty on July 28.