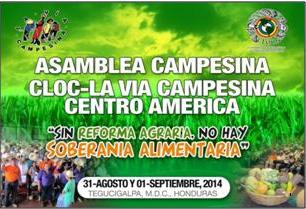 The member organizations of CLOC-Via Campesina Central America, from Panama, Costa Rica, Nicaragua, Honduras, El Salvador and Guatemala, are together in assembly in Tegucigalpa, Honduras, this August 31st and September 1st, 2014. After carrying out consideration and analysis of the grave situation in the Central American countryside and the peasant movement in the region, we reach out to the Central American public, the governments of the region and the international community with the following conclusions:

1. The effect of climate change and the lack of preventive measures by the neoliberal governments in the last 20 years have combined to aggravate the food and climate crises in the entire Central American region, to such a degree that today we face a near-total loss of the first harvest of the year due to a severe drought.  More than three million peasant families currently face insolvency and a complete inability to attempt a second harvest—without seeds, credit, or water.  The immediate effects of this crisis are malnutrition, accelerated migration, and massive increases of school dropouts, as well as food hoarding and speculation by the private sector. Meanwhile,the main responseby government has been to increase the imports of basic grains—leading to historic profits by importers and the destruction of national farm economies—as well as the rushed approval of new seed laws that fling open the doors to genetically engineered crops, gravely threatening our native seeds. The absence of public sector strategies for building food sovereignty means, in effect, that Central American governments have abandoned the possibility of supporting peasant production, public credit, technical assistance and farm diversification. In the case of coffee, the coffee rust epidemic has arrived in the context of governments that abandon small farmers to their fate, thus multiplying their suffering and leading to greater unemployment and malnutrition among rural workers.

2. La ViaCampesina in Central America affirms that the climate crisis is not temporary but rather a structural symptom of capitalism that threatens our region with permanent negative impacts and greater food insecurity.

3. The food and climate crises have no solution as long as public policy continues to advance contaminated seeds, the invasion of our territories by megaprojects related to foreign mining and energy industries, the concession of our common goods to transnational capital, and the forced acceptance of monoculture plantations of non-food crops that displace our families from our traditional lands and territories.

4. We categorically condemn the repression and criminalization of peasant struggle, including the murders, violent evictions, and legal persecution of peasants. We express our solidarity with the peasants of Honduras and Guatemala, who have suffered the most intense repression of their struggles, including the murder of our friend Margarita Murillo earlier this week.

5. We reiterate our calls on governments and international institutions, including the Central American Integration System (SICA), the FAO and the FIDA to convoke a Central American Summit to urgently address the food and climate crisis, with the participation of peasant sectors, small producers, rural women and indigenous peoples.

6. It is absolutely necessary to advance our concept of integrated agrarian reform. Within this framework of legislative reforms, it is critical that new proposed laws be approved, such as the legislation related to rural development in Guatemala, as well as the law of Food Security and Sovereignty in El Salvador, and the law of Integrated Agrarian Reform in Honduras.