Home » The Matthadiguda Declaration for Food Sovereignty in Telangana -2015 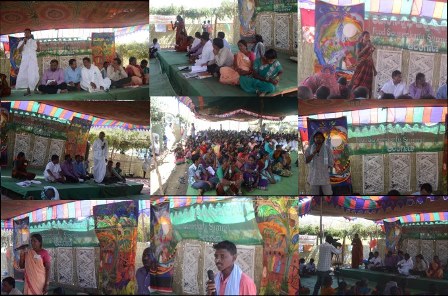 (India, Telanganam February 24, 2015) Over 600 delegates participated in the Telangana Food Sovereignty Summit organised by the Food Sovereignty Alliance, India and hosted by its member organisation Telangana Adivasi Aikya Vedika, in Matthadiguda village, Adilabad district, Telangana, between February 22 and 24, 2015. Diverse social movements and civil society organisations of Telangana as also Adivasi, Dalit and Farmers movements from Andhra Pradesh, Delhi, Jharkhand, Karnataka and Maharashtra participated and expressed their solidarity with the Matthadiguda Declaration on Food Sovereignty in Telangana:

We the adivasis, dalits, peasants, shepherds and co-producer citizens of Telangana, Indiaassert our collective rights to our land, forests, water, air, indigenous seeds and animals, our diverse food cultures, our knowledge systems and local markets. We shall safeguard our sacred relationship with Mother Earth and protect this abundance of life for future generations. We declare that it is women of our communities who are leading this movement.

Towards the reconstruction of Telangana, we resolve to organise communities to return to this positive movement for Life that includes a commitment to:

We call upon the ruling party and all opposition parties in Telangana to oppose The Right to Fair Compensation and Transparency in Land Acquisition, Rehabilitation and Resettlement(Amendment) Ordinance, 2014. This Ordinance stands to destroy the livelihoods of adivasis and all farming communities, threatens our food sovereignty, and violates constitutional safeguards of adivasis and farming communities.

Seed[1] sovereignty is central to rebuilding our diverse local food-farming systems, food cultures and food sovereignty to feed us all. Agro-ecological production of food based on our ancestral knowledge is key to revitalise our indigenous and peasant food webs, heal mother earth, and build our resilience as communities to climate change.

We call upon all farming communities to participate in this movement to:

We urge our brothers and sisters to resist the industrial agriculture and livestock corporate production system:

We alert all citizens to organise against the rapid supermarketisation and corporate take over of our food systems. These markets that offer “cheap food” cover up a reality of massive injustice and hidden subsidies to Multinational Corporations (MNCs). It is food produced off land that was once owned by peasants, who are now displaced by Corporations and large industrial food chains, or procured from producers under hugely exploitative conditions, or imported into the country from Multinationals of the Global North. It is food produced from capturing, monopolising and poisoning our resources (water, air, land, forests, energy, seed) that in turn drive the hunger, climate and energy crises. We urge consumers to become co-producers, by actively supporting the struggles of diverse communities against this capitalist industrial agriculture and food system, and through responsible consumption that supports local agro-ecological peasant production. Towards this end, we extend our solidarity to small vendors of Telangana who sell milk, vegetables and other food produce in their struggle against Corporate Monopoly of Food.

In this effort, we as co-producers of the movement shall organise the urban working class and young people to connect with producer communities to co-create a just system of food production, procurement, distribution and consumption.

We commit to creating spaces for young people’s leadership within our movement, as they are the present and the future of Food Sovereignty.