Home » The Heat Is On: Via Campesina and Allies Challenge Climate Capitalism 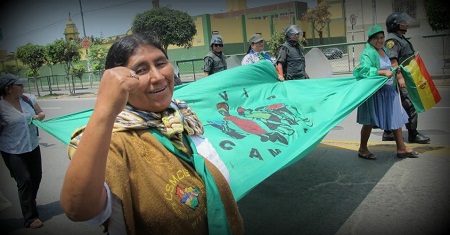 “There’s absolutely nothing smart about it,” said Chavannes Jean-Baptiste, a Haitian Via Campesina leader who coordinates the movement’s work around climate change, in a critical workshop on Climate-Smart Agriculture in Lima. “The climate crisis is rooted in capitalism, which is also in crisis as an economic system,” he explained. “Entrepreneurs are trying to emerge from this crisis, and as a way of doing so are creating green capitalism, of which Climate-Smart Agriculture is typical.”

A new report by NASA and the National Oceanic and Atmospheric Administration (NOAA) indisputably confirms what many scientists had predicted: 2014 is officially the hottest year on record. And this past year is not an anomaly — the previous 10 hottest years on the books have all occurred since 1998. This announcement adds to the urgency expressed just last month in Lima, where political leaders and business tycoons from around the world met for the 20th yearly session of the Conference of the Parties (COP 20) to the UN Framework Convention on Climate Change (UNFCCC). The gathering in Peru was historic in that it was the last time the decision-making body would meet before COP 21 in Paris next December, where an international and legally binding agreement on climate will be signed.

However, growing movements of those on the frontlines of climate disruption argue that the high-level political remedies touted at venues such as the COP amount to false promises and leave out marginalized voices. Via Campesina is perhaps the most prominent of these movements, with more than 250 million peasant, pastoralist, and indigenous members from around the world. Along with allies ranging from labor to environmental networks, Via Campesina organized the Cumbre de los Pueblos (Peoples Summit) in its own grassroots rendition of the COP 20 process in Lima to promote bottom-up solutions to the climate crisis and refute the corporate-driven and exclusionary nature of the official negotiations.

Two policies highly promoted at COP 20 were Reducing Emissions from Deforestation and Forest Degradation (REDD) and Climate-Smart Agriculture, both aimed at reducing temperatures worldwide through carbon trading. At a first glance, REDD and Climate-Smart Agriculture appear laudable actions — especially given what are seemingly climate-friendly names. But under the surface, these programs create chaos within already volatile ecosystems and sabotage humble livelihoods.

Take REDD for example. In a nutshell, REDD allows wealthy industrialized countries and corporations to continue polluting by buying forests in the Global South to offset the carbon they release into the atmosphere through their practices elsewhere. These forests, meticulously managed by generations of indigenous people, are folded into the market — often resulting in the forced eviction of communities. Even worse, REDD makes no distinction between natural forests and industrial tree plantations — meaning that its implementation often results in massive loss of biodiversity.

“There is no excuse to turn nature into a commodity,” said Tom Goldtooth, director of the U.S. and Canada-based Indigenous Environmental Network, a close ally of Via Campesina. Both groups are strongly opposed to REDD and work together in spaces such as the No REDD in Africa Network. Goldtooth spoke powerfully at the Peoples Summit in Lima, warning against the interconnected nature of imperialism, militarization, and market-dependent strategies. “We reject the WTO of the sky,” he concluded.

Climate-Smart Agriculture, another centerpiece strategy to the COP proceedings, basically takes the tenets of REDD and applies them to farmland. Between 44 and 57 percent of all greenhouse gas emissions are from food production, and the overwhelming majority of these discharges are the direct result of wasteful industrial agriculture. Climate-Smart Agriculture builds on staples of the Green Revolution — modified seeds, chemical pesticides, and synthetic fertilizers in the name of intensification and productivity — to impose new biotechnology on farmers around the world, creating yet another wave of dependency on markets. Just as with REDD, investors from the Global North will receive carbon credits from their contribution to Climate-Smart Agriculture projects in the Global South, thus increasing speculation within the food system by expanding its profit value.

“There’s absolutely nothing smart about it,” said Chavannes Jean-Baptiste, a Haitian Via Campesina leader who coordinates the movement’s work around climate change, in a critical workshop on Climate-Smart Agriculture in Lima. “The climate crisis is rooted in capitalism, which is also in crisis as an economic system,” he explained. “Entrepreneurs are trying to emerge from this crisis, and as a way of doing so are creating green capitalism, of which Climate-Smart Agriculture is typical.”

The slogan of the Peoples Summit in Lima — “change the system, not the climate” — is one that will persist throughout the year and into next December’s COP 21 in Paris, where a parallel Peoples Summit will again accompany official negotiations. Via Campesina and its tight network of allies are committed to their cutting-edge alternatives, particularly food sovereignty and agroecology.

Food sovereignty assumes the fundamental principal that rural working people and their urban counterparts — not market institutions and corporations — should govern the global food system. Agroecology is the key practice for realizing food sovereignty, building local markets through ecological methods grounded in tried-and-true ancestral knowledge. In that process, carbon is sequestered in the soil — helping to curb global warming patterns while protecting territorial rights. “Agroecology can double food production in entire regions within ten years, while mitigating climate change and alleviating rural poverty,” stated Olivier de Schutter, former UN Special Rapporteur on the Right to Food upon presentation of his March 2011 report to the Human Rights Council.

REDD and Climate-Smart Agriculture are experimental programs with irreversible implications on the environment, while food sovereignty and agroecology respect the earth’s natural systems. “Food sovereignty is our struggle against capitalism and the way it shapes our land,” said Nivia Regina da Silva, representative of the Landless Workers Movement (MST) in Brazil. MST is a founding member movement of Via Campesina that, among other initiatives, runs political training and agroecology schools throughout the country. Along with other Via Campesina members and allies, MST organized a lively conference on food sovereignty that was a focal point of the Peoples Summit in Lima.

“Peasant agriculture can feed the world and cool the planet,” affirmed Jean-Baptiste.

Via Campesina’s activism around climate is integral to its obligation of representing those most affected by systemic injustice. And this year, while high-level negotiations further unfold, the movement and its allies will be sure to turn up the heat every step of the way.