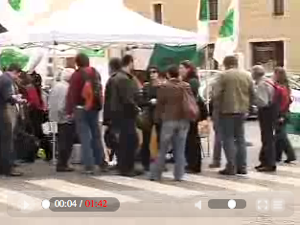 On the 18-21st of April 2009 the governments of the G8 countries will come together in Treviso – Italy for their first meeting on agriculture. The agenda will focus on food security and how the agricultural sector could contribute to a revival of the economy. Besides technical issues, the Doha round, Global Partnership, FAO reform, agro fuels and climate change will also be discussed.

La Via Campesina is extremely concerned about the outcomes, as the G8 is not the appropriate place to define solutions for the food price crisis. It is not the role of the richest countries to define what the poorest should do! This „Agricultural G8“ which has been expanded to include Brazil, China, India, Mexico, South Africa and Egypt, shows the importance of agriculture within the new international infrastructure established in the wake of the financial crisis. These governments expect to find a solution through the same policies of international governance which have created the problem.

The rural crisis is to a large extend the result of ongoing neo-liberal structural adjustment policies and trade liberalisation pushed especially by the G8, which destroy peasant based food production and turn large numbers of countries from net food producers into net food importers, making them heavily dependent on international markets. This ongoing de-regulation of agricultural markets combined with speculative capital coming from financial markets caused huge speculation on food prices. It destabilized domestic markets, throwing millions more into hunger and poverty. Governments of the world have put the dogma of the free market above peoples’ needs. It is now evident that this ideology leads only to bankruptcy and poverty.

In London the G20 announced an 850 million dollar (1) program to „support “developing countries” in countering the financial crisis, to be executed by the IMF and the World Bank. We fear that this program will be a new instrument similar to Structural Adjustment Programs and the WTO, which will impose neo-liberal policies.

At the same time we see Transnational Companies with the support of the big foundations moving aggressively into Africa, where they hope to impose a second „green revolution“ (through the sale of fertilizers and GMO seeds) and to grab millions of hectares of land for future food and agro-fuel production. For these corporations profit – and not hunger alleviation – is the priority (2). We are seeing big international investors and speculators move away from financial products and into to food products and agricultural land in the South. We can just wait for the next bubble to explode, for the next crisis to emerge.

Instead of maintaining and reinforcing the same policies, we need a re-orientation of the food system towards food sovereignty. We want the peasant model of sustainable food production to be recognized as an answer to the climate and food price crisis.

The G8 should discuss and analyze their own agricultural policies, especially the CAP and the Farm Bill, in order to evaluate their contributions to the food price crisis and take the necessary counter measures. The CAP through the export-refund system (on milk for example) essentially dumps agricultural products in third countries, destroying their internal markets and thus making it impossible for local producers to compete.

The G8 should not give more financial assistance for seeds and fertilizers but support and encourage national governments to take up their responsibility and restructure their agriculture systems away from corporate led, export oriented production. National governments should implement the following measures:

We call upon the G8 countries to recognize the failures of their policies and the devastating impacts these policies have had on peasant food production. We need a dramatic improvement in the global governance of agriculture and food. The G8 should give its full support to a fundamental reform of the UN agencies (Food and Agriculture Organisation-FAO, the International Fund for Agricultural Development – IFAD and the World Food Program – WFP) as well as the Consultative Group on International Agricultural Research – CGIAR to come to one single space in the UN system that acts in total independence of the WTO, the WB and the IMF, that has a clear mandate from governments, a decisive participation of peasant, fisher folk and other Civil Society Organisations, and a transparent and democratic process of decision making. We are against the creation of the so called “Global partnership”. We protest vigorously against the circus of the ongoing creation of new structures and spaces. They are bound to fail again and again as they undermine existing bodies and continue to implement the same bad policies (3).

A conclusion of the Doha round as well as of other Free Trade agreements is unacceptable as they will only serve to deepen the crisis in peasant food production. The WTO, World Bank and IMF should be forbidden to interfere in domestic food policies food is not only a “technical” issue. Living in a world where everyone can eat and where farmers can make a living is a question of political decision. We are demanding that the leaders of the world take up that challenge.

(3) See also the statement issued by La Via Campesina and other organisations during the High level Meeting in Madrid (January 2009):