Home » The future of family farming is in our hands 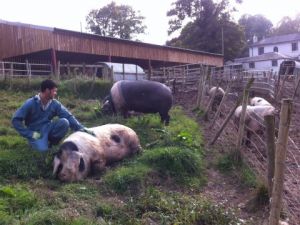 Family farming is a hot topic this year. The Food and Agriculture Organisation (FAO) of the United Nations has declared 2014 the International Year of Family Farming. And last week, family farming was the focus of World Food Day 2014.

Of course there’s is no guarantee that a family farm is well-run or sustainable. But the best farms – those that best preserve traditional food and culture, contribute to balanced and culturally appropriate diets, maintain agricultural biodiversity and use natural resources sustainably – tend to be family farms.

That is, farms that are managed, worked and often (but certainly not always) owned by a family and its members.

This year’s focus on family farming is both wise and welcome. In both ‘developing’ and ‘developed’ countries it is the predominant mode of food production, and it is essential in providing both national and global food security.

The FAO has found that worldwide, family farms are responsible for at least 56% of agricultural production, and that family farmers are more productive per hectare than industrial monocultures – despite receiving lower subsidies and using fewer chemical and fossil fuel inputs. Check out this great infographic for more information

But around the world, family farming is under threat

However, the future of family farming, and therefore of food security, is under threat. A World Economic Forum document from 2012 warned of a future where the contribution of small-scale farmers to world food production will drop from 40% to 0% by 2030, and be replaced with large-scale industrial monocultures.

Such reports do not address the massive effects this change will have on the local economic and social structure in countries around the world.

There is no clear policy in place to deal with the millions of farmers who have already lost their livelihoods to land grabbing and the numbers will rise if more small-scale family farms are allowed to disappear.

The UK government is a case in point. It claims to support sustainable agricultural production – yet its trade policies and international aid programme benefit multinational corporations at the expense of smallholders.

Such initiatives include the G8’s New Alliance on Food Security and Nutrition and theTrans-Atlantic Trade and Investment Partnership (TTIP).

Defra’s attack on small, sustainable farmers in the UK

Domestic policies that damage small-scale farming that have been pushed by the Department for Environment, Food and Rural Affairs (Defra) include the cancellation of subsidies for any agricultural holding less than five hectares / 12 acres.

This immediately excludes a large number of smallholders, many of which can be extremely productive and profitable (as shown by research from the Ecological Land Cooperative showing a livelihood can be made on 10 acres or less).

At the same time Defra was lobbying against EU proposals to cap subsidy payments to large landowners at €300,000 per year.

“Defra policy is increasingly driven by the demands of big business and large landowners”, says Dan Taylor from the Land Workers’ Alliance (LWA), a national coalition of producers and member organisation of the international peasant farming movement La Via Campesina.

“We have seen clear examples of this with their recent decision to strip small farmers of entitlements to public support while at the same time refusing to limit payments to the country’s biggest industrial producers. As a referee for UK farming, Defra is not only short sighted but inherently biased.”

If we are really serious about the future of family farming we need food sovereignty – the ‘right of peoples to define their own food systems’ – to protect family farmers and reclaim control of the world’s food supply.

Food sovereignty puts the people who produce, distribute and consume food at the heart of decisions around food policy and practice, rather than the markets and corporations that have come to dominate the global food system.

A policy environment that supports food sovereignty would include measures to support small-scale farmers that ensure access to markets for their produce, strengthen land tenure rights and improve access to appropriate new technologies that can increase production and build resilience.

It would also mean improving the transparency of the food chain to allow people to know more about where their food came from and how it was produced.

Farms Not Factories is one organisation working to engage and empower consumers to put food sovereignty into practice.

It is a call to collective action, which urges people to pledge to boycott meat from animal factories and instead support real (and mostly family) farms by buying only ethically produced, high welfare pork.

The campaign focuses on the pig industry to highlight injustices in the global food system – from the unfair advantages agribusiness has over small-scale producers, to the environmental, economic and social destruction caused by intensive animal factories and big agribusiness.

Supporting food sovereignty through buying meat from real farms, not animal factories, will enable producers to prioritise animal welfare and contribute to agricultural biodiversity and the sustainable use of natural resources.

By taking the Pig Pledge, informing ourselves about the true costs of intensive industrial farming and changing our shopping habits to support the principles of food sovereignty, consumers will be sending a clear message to government, big agribusiness and retailers:

“We want to take control of our food systems. The future of sustainable family farming is in our hands – we must support the food sovereignty movement in order to create a good policy environment in which family farming can prosper.”

Holly Creighton-Hird is Campaigns Coordinator at Farms Not Factories, a nonprofit organisation working through filmmaking and campaigning to support the food sovereignty movement. She is currently working on the Pig Pledge, a new campaign exposing the true costs of meat from animal factories and inspiring people to make food choices that enable fairer food and farming systems. She also campaigns on food and access to land with Transition Heathrow and the Food Sovereignty Movement UK.