Home » The FSPI’s Action on G33 Meeting: Stand by your people, G33 Ministers!

Today (20/3), hundreds of farmers, youth, and farm workers from Federasi Serikat Petani Indonesia (FSPI) march in front of Grand Melia Hotel, Jakarta to strongly urge the G33 countries to stand by the people. Several farmers blocked the exit of Grand Melia, and waved the ultimate sign “Our World Is Not For Sale”—right in the front of the delegates’ way out. 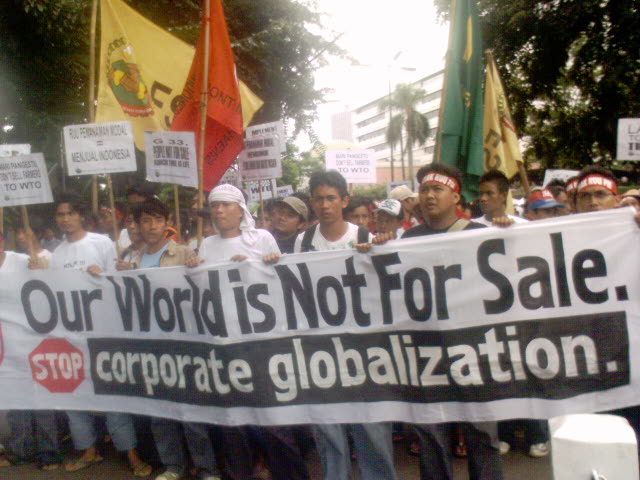 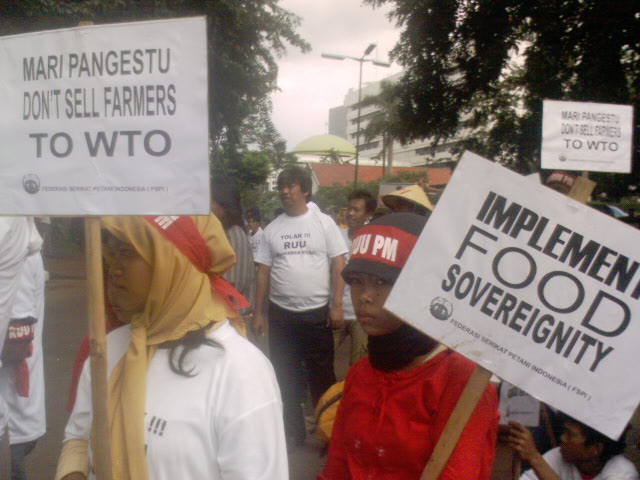 The demonstration is part of series of actions planned by FSPI in order to respond to the efforts by the US, EU, and other parties to resurrect the WTO. FSPI suspects that these developed countries and the WTO will intervene in the G33 Ministerial Meeting, as a lot of Ministers have come to Jakarta. Pascal Lamy has also reportedly come to this meeting. To enumerate, the high profile people who have come include, Lamy-who will be here for his second time in Jakarta within a month’s time, G4 ministers, and the Berkeley Mafia: politicians and experts who devote themselves to neo-liberal policies in Indonesia.

“Stand by your people, G33 Ministers!” said Henry Saragih, General Secretary of FSPI. Peasant women were holding banners “Don’t Sell Farmers, Marie Elka Pangestu!”—Marie Elka Pangestu is the Indonesian Commerce Minister, chair of the G33. The others were swaying signs “Implement Food Sovereignty”, “WTO Out of Agriculture”, and “WTO Kills Farmers”. As the struggle in Seattle, Cancun and Hong Kong, FSPI thinks that though the issue of SP/SSM is considered as a mechanism to protect the people—especially farmers—in the poor and developing countries, there are still many aspects that still need to be questioned and criticized. SP/SSM is still part of the WTO framework and very fragile and can easily be traded off in the negotiations. “Even with the maximum proposal, many Indonesian farmers still think that it won’t be enough to protect our livelihoods,” Henry continued.

The action itself kicked off at 14:00 in the afternoon. The people in the action are quite strong because before they have come from the House to respond to the new Investment Bill Plan (RUU Penanaman Modal), which in the people’s view is contaminated by neo-liberal plans. There are also many articles in the Bill that sound a lot like WTO rules. Many people expressed their feelings about the current situation and the neo-liberal model (WTO, IMF, World Bank), and there were a lot of solidarity speeches by workers, trade unions, youth groups, and anti-debt campaigners.

At the end of the action, they expressed their feeling about Pascal Lamy, the actor who is responsible for efforts to the WTO’s revival. All shouts: “Go To Hell Lamy!” and pointed their fingers straight to the hotel. The action ended with the reading of the position paper, and tomorrow all the farmers agreed to hold another action.