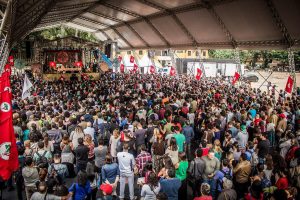 “The MST use the Fairs as the main methodology in the debate with the population regarding the Popular Agrarian Reform and healthy food production”, said João Pedro Stedile, the national coordinator of the MST. The speech opened the space of discussion that gathered thousands of visitors in Palco Arena, in the Água Branca park: the meeting “Healthy foods: a right for everyone”, during the National Fair of Agrarian Reform in São Paulo.

In addition to the coordinator of the movement, the bishop of the Anglican Church, Dom Maurício Andrade, and the nutritionist Patrícia Jaime, participated in the meeting, in the debate which invited all the visitors to reflect upon of what the Fair offers: healthy food production.

“Today, Brazil has the largest territory with potential for food production, but it is not enough to produce just any food, it needs to be healthy food for the people, Stedile explained, when pointing out the topicality of debating the struggle for healthy food production. 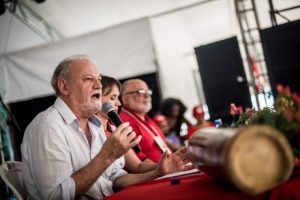 Also, according to Stedile, the movement, by collectively debating the struggle for food production, takes an important step towards concretizing the The Popular Agrarian Reform project, which was developed by the MST itself and has been guidelining the actions of the movement in the last period.

“The Popular Agrarian Reform needs to meet the necessities of all people, solving the problems of landless families and the historical inequality of our society, as well as advancing with the main paradigm which is the production of healthy food for the whole society”, he points out.

Stedile reaffirmed the role of the Fairs in broadening the debate with society. “This Fair has been arranged before in all the states in Brazil where the MST is organized, combining the presentation of fruits of the struggle for Agrarian Reform with the the theoretical reflections which help us deepen the debate with all people”, reflected the activist.

“Our model of food production necessarily involves the diversity of crops, the involvement of the whole family, cooperative actions and the need to apply agroecology, techniques and popular knowledge. That is why the Popular Agrarian Reform goes far beyond the struggle for the land: it is to fight for knowledge, for culture, for agroecology, for education and all this is expressed in our Fairs.” 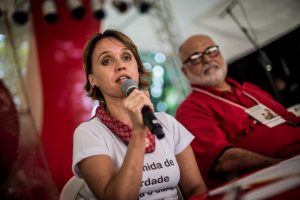 Patrícia Jaime, nutritionist and food and nutrition activist within collective health and SUS, highlighted the Fair as a “pedagogical and transformative” space.

According to the nutritionist, it is necessary to break with the incorporated hegemonic discourse in regards to healthy eating: “Healthy eating is more than nutrient intake, it is understanding what we are eating, where our food came from, who produced it, and with it we strengthen a food system that promotes social justice”.

“Food is part of building our individual and collective identity, it is part of our culture and that is why this debate needs to reach everyone,” said Jaime in denouncing the withdrawal of labelling GM foods. “In the dead of night we had this defeat and, in addition to reducing our culinary habits – cooking our food – the difficulty of information are our main obstacles in the fight for eating healthy.”

Bishop Mauricio Andrade, representative of the Anglican Church and the Ecumenical Movement, has strengthened the idea of the collective defense of healthy food as equivalent to the defense of life. “Religion and food are closely linked, we celebrate communion and communion precedes sharing, community and this Fair represents the great communion of healthy food, a food that symbolizes life and, therefore, we need to defend it,” said Dom Mauricio.

It is very symbolic that this Fair happens in São Paulo, and that here, in one of the main cities of the country, we are able to talk about the relationship between the countryside and the city from the perspective of the Popular Agrarian Reform, with this Fair MST gives an example of expanding the debate to the people”, Andrade said.

At the beginning of the meeting, the landless Mística, with music, poetry and resistance, were held in memory of Paul Singer, who died last April. He was an economist and one of the forerunners of the concept of solidarity economy in Brazil. 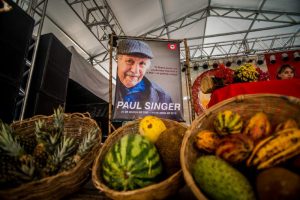 “Paul was a man of simple ideas, who thought of the simple people. His ideas remain important and that is why he is and always will be present in us”, said Francisco Dal Chiavon, member of the coordination of the MST, during the tribute.

With the slogan that the country needs bursting with Popular Agrarian Reform, the Fair, with its colors, smells and people, celebrated the struggle for land and the organization of peasants throughout the country at the meeting. The 3rd edition of the Agrarian Reform Fair still has an ongoing programme in the Parque da Água Branca, West Zone of São Paulo, until Sunday (06).