Home » The closer producers get to the customer, the stronger our power to protect agriculture becomes

-Learn from the experiences of Japanese women peasants-

From 1-4 February 2009, KWPA participated in the general meeting of the Women’s Association of the Japanese Family Farmers Movement, NOUMINREN. At the Via Campesina regional meeting held in South Korea in August 2008, the KWPA and Korean Peasants League (KPL) from Korea and NOUMINREN from Japan agreed to improve and strengthen the relationships and solidarity between the three organizations. The agreements included a mutual exchange program, policy exchange in order to understand and analyze both governments’ agricultural policies, and a joint struggle against FTAs, especially the Korea-Japan FTA. At that time, the organizations had another meeting in Mozambique to specify their plans. This visit was the first action taken after the agreements were made. 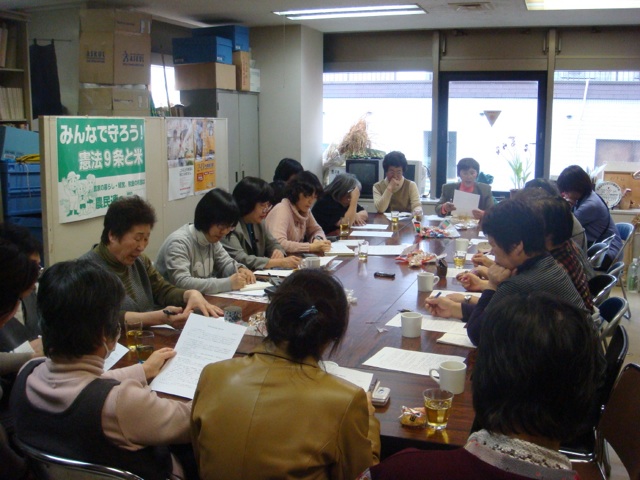 NOUMINREN has usually held the women’s general meeting in the first week of February. The holding of an annual meeting of the Women’s Association was established a year after NOUMINREN was founded in 1989. This year’s assembly celebrated its 20th anniversary. The Women’s Association is considered a special committee and has members from 25 prefectures; NOUMINREN has regional organizations in 47 prefectures. The number of NOUMINREN members is about 40,000, out of which women account for 30 percent. NOUMINREN has a principle that encourages husbands and wives to join together to enlarge local organizations.

130 members attended the women’s general committee meeting from 1-2 February in order to define their plan of action for 2009. The main aims are:
•    to expand production capability
•    to oppose obligatory rice import and reduction in paddy acreage
•    to secure food safety
•    to oppose unfair taxation through group return
•    to take measures to respond to the price increase of farming machinery to encourage food processing and direct sales
•    to improve women’s positions in rural areas
•    to improve and strengthen solidarity with the national liaison network SHOKKENREN to protect food and health.
•    to mobilize movements against undesirable agriculture
•    to oppose the amendment of Agricultural Act which would legalize big corporations’ control of farming land and put pressure on the agriculture councils of local governments

In addition, the action plan includes improving local organizations and strengthening and encouraging the Women’s Association so that more women can be empowered to develop their capabilities and take leadership positions.

In particular, this year there will be a general election. During the election campaign, there has been a commitment to resist change to agricultural policies, and to promote women peasants’ involvement in activities to secure peace.

On the second day the meeting continued with the objective of sharing and learning about the activities of local organizations in each prefecture. There was an exchange of information and activity reports, introducing a variety of tasks and local issues. Over two days, a total of 49 members participated in the meeting, which featured the slogan, “Share Experiences and Learn!” Through this assembly women peasants were also able to have time to develop the ways they expressed themselves. Traditionally some experts or outside presenters would be invited to give lectures during the meeting, but this year, they boldly broke with tradition. Instead, they listened to the voices from NOUMINREN women members. Time was also set aside in for participants to share their experiences regarding production, their livelihoods and struggles.
Through this exchange program, we learnt that there is no difference between the current agricultural situation in Japan and Korea. However, the action plans set out by the small-scale farmers and family farmers of Japan and Korea did differ somewhat. This year, the slogan of the meeting was “Let’s produce and sell to broaden hope!” With this slogan, the Women’s Association decided to largely empower women peasants as producers.

We also visited a Direct Delivery Center and Direct Market located in the Chiba-ken prefecture near Tokyo. Both have become major facilities for women peasants’ activities. NOUMIREN is managing 81 direct delivery centers across the country.

Among all the markets, the Chiba-ken market sells agricultural products harvested and processed by NOUMINREN members. These kinds of markets, which directly deliver healthy and fresh food from the field to the table, are places where both consumers and producers can meet in person, and if possible, avoid competitiveness among members. Mr. Iijima, who manages a market in Chiba-ken, thinks that the market is not just a place for producers to meet and socialize with customers directly and to hear opinions about how the products taste or address consumer questions or problems, but it is also a place for consumers to get a feel for what producers are like.

A member of NOUMINREN, Mr. Saito, also told us a story about why a couple moved to the town. The couple told him that they moved there because they liked his vegetables so much. They decided to live in that town so they could purchase the vegetables he produced. They asked Mr. Saito never to close the market.

The visit was a great opportunity to realize once again that in order to protect agriculture that is based on local production and local consumption, farmers need support from all people involved through building close relationships with consumers in local areas.