Home » The action against WTO is not over 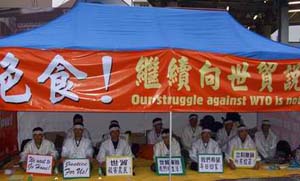 “The action in Hong Kong against WTO is not over”. Those are the words written in bold in the tent of the hunger strikers in front of the gate of Tsim Tsa Chui Star ferry. The 12 WTO protesters are still in Hong Kong because the police brought them to court for trial. As you know they already released from jail on bail but have to stay in Hong Kong until the trial on January 11.
by Tejo Pramono in Hong Kong

Instead of passively waiting for the court hearing, they have started an hunger strike  on January 5. During the day, they stay in the tent in front of Tsim Tsa Cui star ferry harbour, in Kowloon area. It is already the fourth day of the hunger strike. There is a candle light vigil every day in the tent, with some speeches form Hong Kong people supporting the protestors and asking the government of HK to release them without charge. Since the location is right close to gate of
the harbour, many people join the candle light vigil.

Yesterday, on January 8, there was an action and a march to theHong Kong Police Headquarter and to the HK Central Government Office. The march started from Lockard Playground. Various groups from Hong Kong and from the international solidarity mission joined the protest: the relatives and families of the protestors from Korea, Hong Kong Confederation of Trade Unions, HKPA, Trade Union Groups from Malaysia, and the Federation of Indonesian Peasant Union -member of La Via Campesina.

The march reached very close to the main door of the Hong Kong Police Headquarter. The protestors made a speech asking the police to release the 14 without charge. The Hong Kong People Alliance handed over a letter to the police.

Close to 6 PM Hong Kong time, the march reached the Hong Kong Central Government Building. The hunger strikers joined the march both to the police and to the government building.  During the march, Ali Fahmi from FSPI declared : ” In Indonesia ,10 years of WTO has made peasant getting poorer and experienced the difficult livelihood. That is why Indonesian peasants joined the last December ministerial conference in Hong Kong, joining the struggle with various group. Peasants and workers in the world are the victims of the WTO. They came to Hong Kong to destroy the WTO. Now 12 people cannot leave Hong Kong because they were brought to court. We are asking the HK government and the police: are you protecting and the WTO  or the people? The protestors came to HK not to protest against the police or the HK government. They came here to struggle against the WTO and bring the welfare for people of the World. So we urge the HK government and the police to release them without charges”.

During the march, like during the actions in December, people kept shouting: “Down down WTO” and also “Release now”.

Elizabeth Tang of Hong Kong Confederation of Trade Unions make the closing speech of the march saying that the coming next three days before the trial on December 11 will be decisive. So we are asking the people of Hong Kong and the people of the world to organise actions or to go on hunger strikes. We have to push the government of HK to release the WTO protestors without any charge.

(*) Tejo Pramono is a technical staff of La Via Campesina International Operative Secretariat in Jakarta.