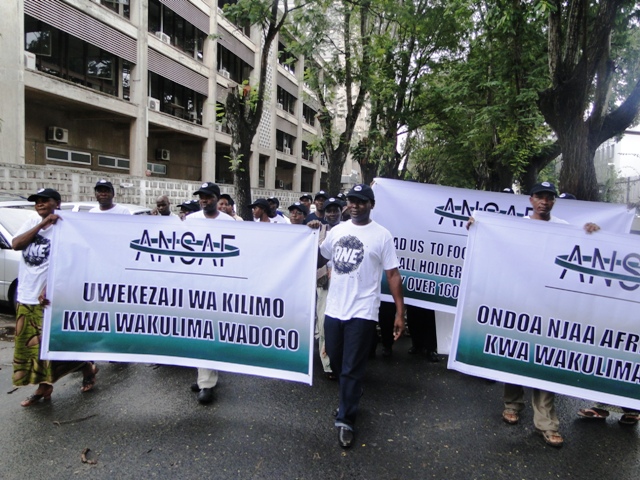 Activists and farmers’ representatives from across Africa on 1st March, 2012 handed President Jakaya Kikwete a petition signed by over 16,000 of them urging the continent’s leaders to increase budgetary allocations to the sector.

The group and ordinary citizens marched a kilometer from the Institute of Finance Management (IFM) to the State House – to deliver their petition, calling on African leaders to provide greater food security for ordinary Africans by increasing investments in agriculture.

Led by South Africa-based NGO, dubbed One Organization, Tanzania’s NGO, ANASAF, the National Network of Small-Scale Farmers Groups in Tanzania (MVIWATA) and other African partners, the group is part of a broader campaign for more investment in agriculture, dubbed the back-bone of many African countries, employing about 80 per cent of the continent’s population.

Among demonstrators, 30 were small scale farmers of which 17 were members of MVIWATA.

The demonstrators, who held placards containing messages pushing Tanzania and other African leaders to increase funding to the agriculture sector, tasked President Kikwete to take the lead in investment in sustainable agriculture to set an example for other Africa leaders.

Presenting the petition to President Kikwete, Africa Director of One Organization, Sipho Moyo called on African leaders to respect the commitment they made at Maputo in 2003 to increase agriculture’s annual budget to 10 per cent come to 2013.

“…as we approach10th Anniversary, currently no more than ten African countries have kept their promise to do 10 per cent…however , we are delighted that Tanzania is leading the way,” said Moyo.

“This is why we look up to President Kikwete’s government and count on his leadership to continue fostering an enabling environment for smallholder farmers,” she added.

According to One-Organization director, massive investments in agriculture would help reduce poverty and improve living standards among rural and urban dwellers in Tanzania and other African countries.

“If you want to address poverty you need to go where poverty is and it is largely in the rural areas amongst smallholder farmers, especially women farmers,” said Moyo, noting: “Reducing poverty will mean targeting investments towards smallholders in order to increase viable employment, boost productivity and ensure efficient local markets which generate positive multiplier effects within rural economies, by improving food self-sufficiency and reducing rural inequity.” A representative of Tanzania’ farmers, Juhasi Muhava said farmers in the country were facing daunting challenges — lacking government guarantee to access quality agricultural inputs, reliable markets for their produce, funds for purchasing modern farming equipment, roads and basic infrastructures and services etc.

Responding, President Kikwete said increasing investments in agriculture was inevitable, because “this is the source of livelihood, source of income, raw materials, food and foreign earnings for millions of people in Tanzania and across Africa.”

He, however, admitted that Tanzania’ agriculture budget has not reached 10 per cent, as stipulated in the Maputo protocol, but “we have significantly increased annual budgetary allocations to the agriculture from around 236bn/- in 2005 to more than 926bn/- in 2011.”

“This is almost four or five-folds increase…I agree we are yet to meet 10 per cent -Maputo target, but in real monetary terms, we have made impressive achievements…there is nobody who can question our resolve to support agriculture sector…I believe, we will get there (10 per cent annual agriculture budget) very soon,” said Kikwete.

However, the President promised demonstrators that he would “faithfully and dutifully,” deliver their petition to the intended destination (African leaders), observing that their (activists and farmers representatives) physical presence at the AU summit in Malawi scheduled for July, this year, was also important, as it would help push the Heads of State to act quickly.