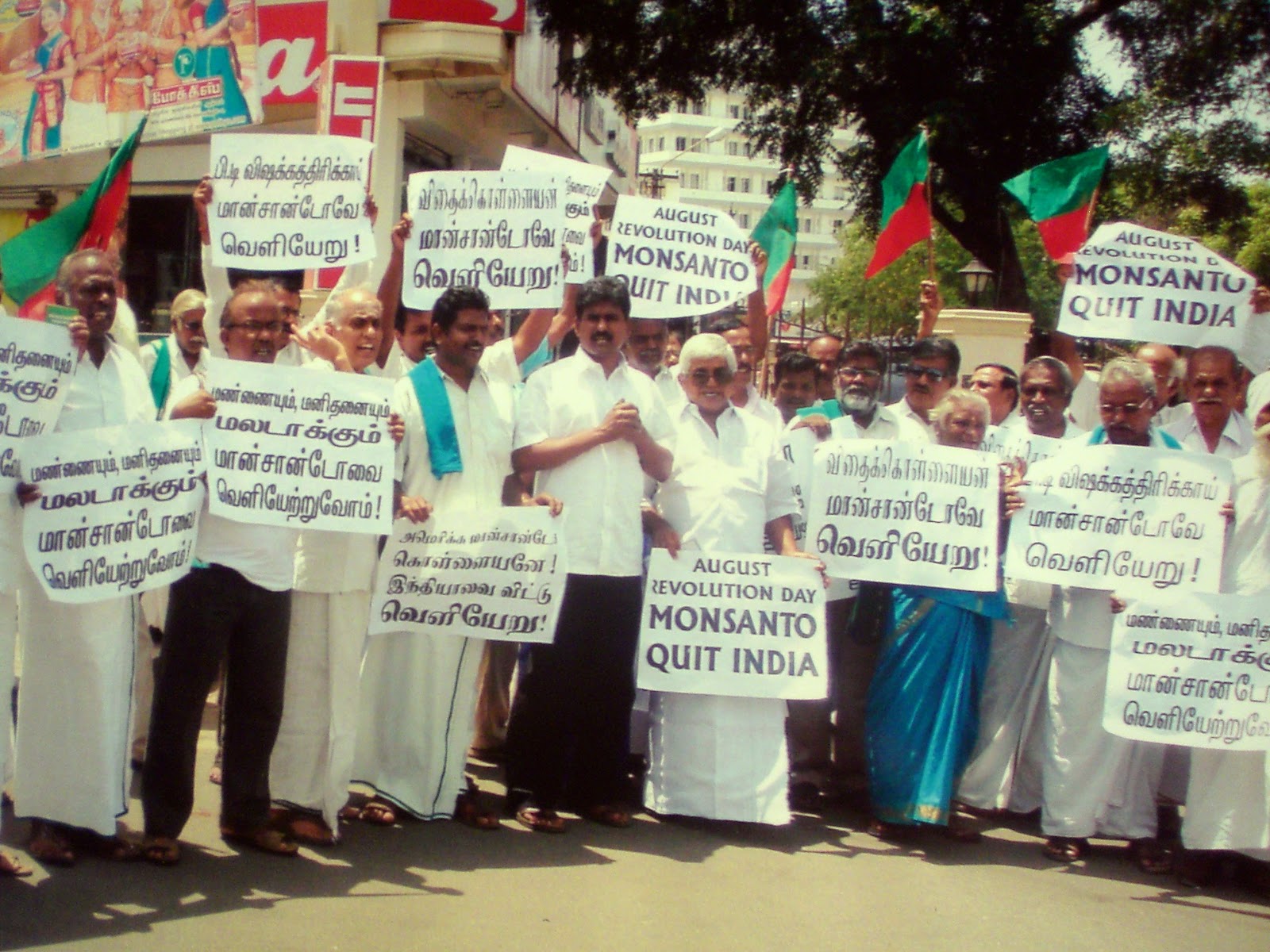 The Tamil Nadu Farmers Association organized a Quit India Monsanto day on the 9th of august in Coimbatore Tamil Nadu to protest against aggressive attempts at the corporate take over of food and farming.  This symbolic protest was timed with India’s upcoming independence day and reminiscent of the anti colonial Quit India struggle during the independence movement. Monsanto is the poster child of the agressive anti farmer and anti safe food corporations. Such protests were organized on this day all across India by other farmers and activist groups too.1

like Monsanto through its subsidiaries for their aggressive and illegal campaign to spread their seeds including untested GMOs into India. Monsanto’s effort with Bt brinjal is to control the brinjal plant in  India. This could happen once the  Bt gene contaminates all local varieties and there are no natural varieties left besides corporate varieties. If that happened then for most brinjal’s eaten and grown in India, royalties will accrue to Monsanto. And given that brinjal is one of the most important and widely consumed foods in India- Monsanto will hit a permanent jackpot and be able to control prices- food after all is not just a luxury that people can forgo if prices escalate. Not only will consumers suffer, but farmers [also themselves consumers] will suffer from increasing seed prices given that corporate seed varieties are way more expensive than farm saved or exchanged or locally purchased local seeds. Already reeling under debts and committing mass suicides, such a model is the last thing they need. Kissinger is famously known to have said – “… control food and you control the people.” This pretty much sums up the main strategy of food corporations – not just technological companies like Monsanto, Syngenta, Dupont, but also the retail – Walmart, Reliance as well as trade – Cargil, ADM etc. That is the very reason why the global peasant movement La Via Campesina contends that food needs to be in the hands of everyone for human good and sovereignty and not in the hands of a few profit driven corporations. Incidentaly Monsanto sits on most policy making spaces and is instrumental for passing agricultural policies of this country = including more recently bringing forth the second green revolution in India [a program to promote its own seeds and pesticides].

There are rampant stories of corporations taking control of crops worldwide, turning farmers from independent food producers to being dependent on companies for seeds and other inputs. Even in India, the only GM crop – Bt cotton has also come to dominate the cotton seed market and the availability of natural cotton seeds has become difficult. This is not necessarily the result of the supposedly great performance of Monsanto’s seeds, but due to extensive government support in promoting these seeds. Monsanto now controls more than 90% of the cotton seed market. This is happening despite Monsanto itself admitting to the failure of Bt cotton in India.2

India’s farmers have welcomed this move by the Indian government. They have resolved to resist Monsanto until it finally quits eyeing our food and farming systems and leaves India and the world for good.