Sustainable family farming can feed the world: Via Campesina’s response to the Global Food Prices Crisis 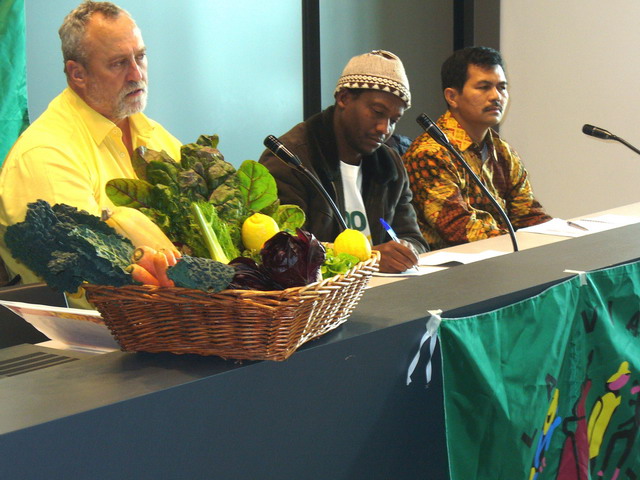 To avoid a major food crisis, governments and public institutions have to adopt specific policies aimed at protecting the production of the most important energy in the world: food !

“Global markets will not feed the world… They are generating hunger at a time when there is no crisis of production” said Paul Nicholson. It is, he added, because of the deregulation of markets and the transformation of food into a ‘speculative financial commodity’ that we see shortages and price increases of food for consumers.

Ibrahima Coulibaly added concerns about the problems caused by agrofuels: “they are reducing food production in the world and increasing prices… Higher prices for consumers are not trickling down to higher incomes for peasant farmers,” he said.

“Farmers need land to produce food for their own community and for their country. The time has come to implement genuine agrarian reforms to allow family farmers to feed the world,” said Henry Saragih.

The global struggle, it was emphasised, is the clash of different models of production that on the one hand – the industrial model – exacerbates climate change and causes hunger and on the other hand – the agroecological model – that can “cool down the Earth” and provide sufficient healthy local food.

Via Campesina believes that in order to protect livelihoods, jobs, people’s health and the environment, food has to remain in the hands of small scale sustainable farmers and cannot be left under the control of large agribusiness companies or supermarket chains.

GMOs and industrial agriculture will not provide healthy food and will further deteriorate the environment.
For example, the new “Green Revolution” pushed by AGRA in Africa (new seeds, fertilizers and irrigation at large scale) will not solve the food crisis. It will deepen it.

On the other hand, recent research shows that small organic farms are at least as productive as conventional farms.

[Governments] have to set up (or to maintain) supply management mechanisms such as buffer stocks and guaranteed floor prices to create stable conditions for producers.

Via Campesina believes that the solution to the current food price crisis lies in food sovereignty.

Food sovereignty is the right of peoples to healthy and culturally appropriate food produced through ecologically sound and sustainable methods, and the right of their governments to define the food and agriculture policies of their countries, without damaging the agriculture of other countries.

It puts the aspirations and needs of those who produce, distribute and consume food at the heart of food systems and policies rather than the demands of markets and corporations.