Home » #CFS43: Summary of Interventions made by LVC delegation at CFS Plenary in Rome 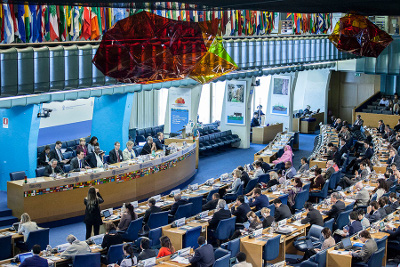 A delegation of peasants, representing La Via Campesina, took part in the CSM Forum, the Civil Society Mechanism for relations to the UN Committee on World Food Security, in Rome this October. The opening statement made by Elizabeth Mpfou, general coordinator of La Via Campesina, at the CFS Plenary was widely reported and can be read here. Nettie Wiebe’s passionate speech about the role of women in defenging land and natural resources can be read here. Eberto Diaz spoke at the plenary and stressed upon the responsible governance of tenure and the voluntary guidelines. His speech in Spanish can be read here. Papis Bakary, from Senegal spoke about the destructive effects of industrial farming and a full text of his speech in French can be accessed here. 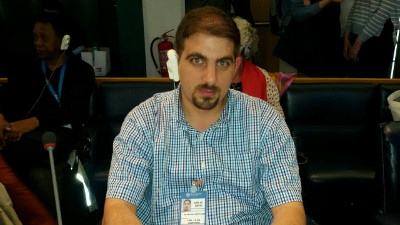 Further to this, Ubai speaking on behalf of UAWC, Palestine spoke about the Global Startegic Frame work. The full text of his speech is as follows;

The CSM welcomes the opportunity to speak in support of the Global Strategic Framework, and to reaffirm our commitment to promoting its use as the underlying framework of the all decisions and policy processes of the CFS. We have agreed with the process thus far which does not renegotiate agreed upon text, and focuses more on making the GSF more accessible.

The GSF is the overarching framework and the only living document of the CFS. However, the GSF has not been sufficiently disseminated and we welcome this priority in the upcoming workplan of the OEWG.  We welcome the call in the decision box for all CFS actors to “promote and make use” of the GSF, as communication and dissemination, do not necessarily equate to implementation.

The strategy on the way forward in the coming working group sessions should include a discussion on how governments and their platforms, ministries and national agencies can better use the GSF, and how the RBAs and their national and regional offices can better support and integrate the GSF into their work, and how other actors including civil society can better contribute to this as well.

We would also like to remind governments, that the GSF is the basis and main reference for a comprehensive monitoring of the use and application of CFS decisions. Thus a specific effort should be made to link the communications and dissemination strategy of the GSF with the work of the OEWG on monitoring.

We look forward to the continued discussion on the GSF, and to better utilizing the great work that we achieved collectively in this body.

Elene Shatberashvili (Elkana, Georgia/LVC), spoke about the stigmatisation of farmers in Georgia and the absence of a proper land registration system. Full text of her speech is as follows;

We are in a very historical moment of humanity. Since thousands of years people are doing agriculture and they always have been the majority. They were the drivers of social transformation but today there is a big change. The majority of the population lives in urban areas and power is concentrated in cities. There is not only a neoliberal approach but a power centric approach in the cities.

The philosophy of reaching the economy of scales and not investing in rural areas disadvantages the rural populations. In Georgia, we have an enormous problem due to the stigmatization of farmers, it’s not regarded as something honorable. It’s a common problem in the developping world. 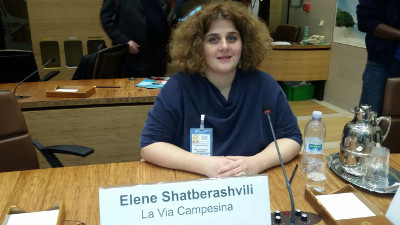 It’s also related to some limitations in the legal framework. I know that it’s questionable in Northern countries but in our country, there is no clear land registration system. The common land is not clearly defined and the access to ressources is extremely limited. Every year, the access to markets is shrinking.

I remember from my childhood that we used to buy milk and yoghurt from a lady who was bringing every morning. It was not only a but also a personal relationship. Now, there are many problems related to safety regulations and the recognition informal markets. However, rural areas have enormous richness and we have to take advantage of this.

The most important principle towards sustainable transformation of rural areas and rural regeneration is to put people in the heart of policies. Recognizing peasants’and women’s rights and ensuring the participation of farmers is the most important issue to be successful.

Agroecological solutions can bring us to better future. With agroecology, landscapes are remaining in hands of population who knows the ecosystems. It’s very important to promote agroecological innovations. It’s not possible to make it without recognizing biodiversity and traditional products.

In the northern part of the world, we have to see how we can attract young people to rural areas. Putting people’s rights at the heart of public policies, taking agroecology as a principle building upon local traditions is very crucial. Today new technologies contribute a lot to  connections between rural and urban.

The issue of land grabbing and land concentration policies is widespread perspective among policy makers and of course it’s very problematic. We need appropriate market regulations for small farmers to operate in the markets. A holistic approach is key to recognize the innovative role of rural areas and their potential.