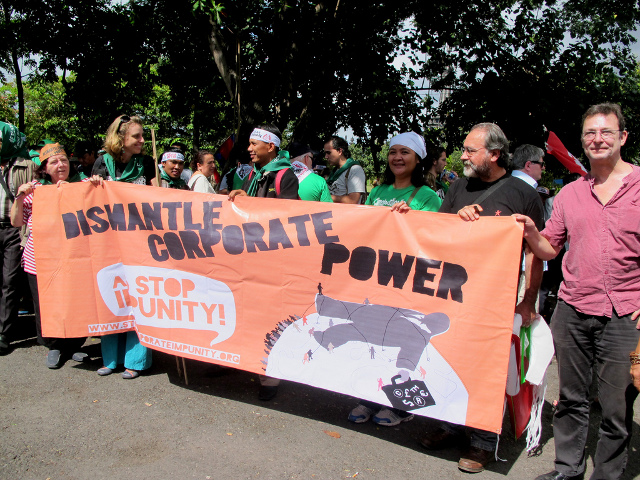 The operations of many Transnational Corporations (TNCs) and other business enterprises cause the devastation of livelihoods, territories and the environment of the communities where they operate; they pursue the commodification of essential services and of nature itself. Many TNCs and other business enterprises also violate or are complicit in violations of human rights and labour rights, erode the basis of food sovereignty, pollute water sources and lands, and plunder natural resources.

The Vienna+20 CSO Conference with 140 participants was held in Vienna on June 25/26 this year to commemorate the Second World Conference on Human Rights and address current challenges for human rights. This Conference called on States to urgently develop and institute binding systems of international regulation and norms for TNCs. States have the obligation to ensure, by establishing strong legal systems of accountability for violations of rights and effective remedy and justice for all affected people, including along the supply chain. The Conference strongly urged States to hold accountable those transnational actors, TNCs and other business enterprises that violate human rights. At the occasion of the recent UN regional forum on business and human rights in Medellín more than 100 CSOs from Latin America and other regions expressed the same concerns and called for a binding instrument. Likewise during a Round Table in the European Parliament in Brussels on September 5th, governments were also urgently asked for a binding instrument to address the accountability of TNCs and end their impunity.

The undersigned social movements and civil society organisations welcome and support the initiative taken by a number of States in the Human Rights Council towards establishing an international legally binding instrument, concluded within the UN system, clarifying the human rights obligations of transnational corporations, in particular in relation to human rights violations, economic and ecological crimes, and abuses, and establishing an effective mechanism to provide remedies and access to justice for all affected people in cases where such remedies are de facto not provided in domestic jurisdictions.