Home » Special Forum in Rome: La Via Campesina asks for a change in FAO policies 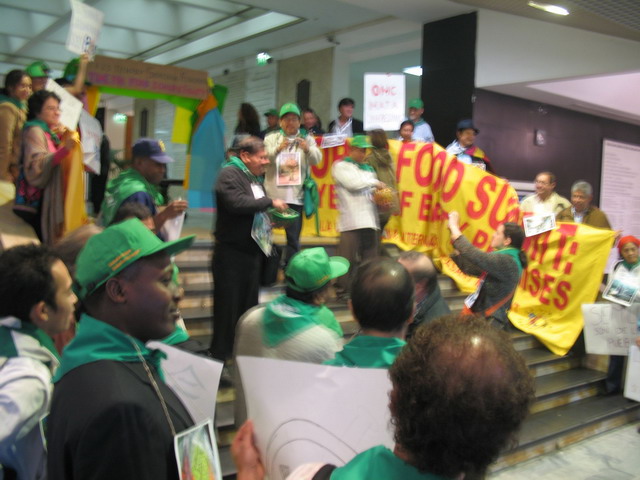 In Rome a delegation of  25 members of  La Via Campesina representing all continents have arrived some days before the FAO Special Forum that was held on October 30 and 31, 2006. Some of them joined the International Planning Committee of  Food Sovereignty (IPC), while others participated in preparatory meetings on the issues of  biodiversity and agrarian reform.

Henry Saragih as the General Coordinator of La Via Campesina said that “it was a pity that not so many head of state, nor agricultural ministers from each government could attend this important FAO meeting, while huge numbers of people sill suffer from hunger around the world”. Farmers and people’s organization however did give due attention to the meeting but did not at all receive the adequate speaking time during the first day of the forum to put forward their views.

The morning of 31 October, La Via Campesina organized another action for official delegates when they entered the conference hall. Farmers of La Via Campesina made a people corridor to make the delegates pass into the building. They had to step over a paper on which was written “IMF, World Bank and WTO”. After this they had to go through a “door” with the text “It is time for Food Sovereignty” welcoming them to the FAO. La Via Campesina wanted to tell the delegates that hunger in the world occurs because of the policies imposed by the programmes and consensus under the IMF, the World Bank and the IMF. La Via Campesina wants FAO to adopt Food Sovereignty as their key policy to end hunger in the world.

The message of La Via Campesina was made even clearer for the delegates of FAO on that day, when Henry Saragih and Rafael Alegria addressed two official sessions in the afternoon as panelists. Henry Saragih told the Forum that four years ago he stood in the same place, tearing the FAO document on food security and then eating it. This was a protest to show that farmers, who are the first victims of hunger in the world, will remain hungry because only declarations on paper about food security were available to address the problem. He stated: “It is time for FAO to change its approach and adopt food sovereignty”.

Rafael Alegria of  La Via Campesina from Latin America made concrete proposals to the Forum when he addressed the issue of agrarian reform. He said that the FAO should follow up the decisions made during the International Conference on Agrarian Reform and Rural Development (ICARRD), held this year in March in Porto Alegre, giving importance to agrarian reform and also acknowledging food sovereignty in its official document. Rafael emphasized that to end hunger will need the concrete implementation of policies based on Food Sovereignty among others implementing a genuine, distributive agrarian reform.