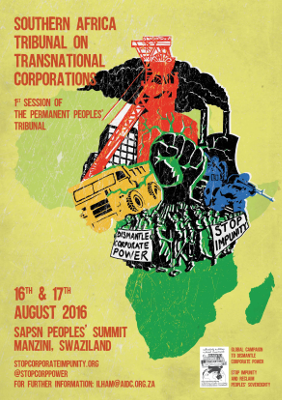 For the Economic, Political, Cultural and Environmental Sovereignty of Our Peoples End the Impunity of Transnational Corporations NOW!

The time has come to unite our struggles in Southern Africa – the campaigns, networks, movements and organizations that are combating transnational corporations – the way they are exploiting our destinies, natural heritage and human rights, dismantling public services, destroying the commons, fomenting violence and endangering food sovereignty in every corner of the continent.

The Southern Africa Campaign to Dismantle Corporate Power invites you to participate in the Permanent People’s Tribunal on Transnational Corporations. The Tribunal will bring affected peoples from Southern Africa together to make their problems visible, analyse them and collaborate and share experiences in order to strengthen our joint struggle.

The effort to unify Southern African struggles is one part of a major global campaign to fight the exploitation of our lands, our eco-systems, our labour and our bodies by big corporates acting together with powerful states. These mega transnational corporations have created a blanket of impunity – getting away with their crimes unpunished and without repercussions – through the dismantling and systematic violation of laws and the signing of international trade and investment agreements, which award investors more rights than citizens. As a result, peoples’ rights have been systematically violated, the Earth and its resources destroyed, pillaged and contaminated, and resistance criminalized, while corporations continue committing economic and ecological crimes with total impunity.

Driven by the imperative to maximize profit, TNCs seek to pit workers from different countries against one another in what is a race to the bottom for the world’s working people. The governance and policies of the multilateral institutions, the International Monetary Fund, World Bank and World Trade Organisations have long served corporate interests, while the institutions of the United Nations, Southern African Development community and the African Union have been increasingly captured by TNCs and placed at their service. In most countries, governments increasingly act at the service of corporate interests, awarding them with tax breaks and a legal system that works to their benefit. National elites use their access to political power and influence over state policy to position themselves so as to benefit from corporate power and stop at nothing to continue plundering the wealth of nations and maintain their predatory relation to nature.

Working class and peasant women carry the major impacts of corporate-led theft of land, water and forests, and the pollution of the resources that peoples across Southern Africa rely on for livelihoods and survival. The patriarchal division of labour means that women have to work longer hours and bear heavier burdens as they search out livelihood alternatives when land-based ones are destroyed, safe water when these resources are stolen or polluted, and alternative energy when forests are destroyed. And it is women’s unpaid labour that fills in for public services that are cut to service debts in support of major infrastructure investments that benefit corporates, and when workers and family members fall ill from environmental pollution and unsafe working environments.

In the face of mounting criticism of their operations, TNCs’ use Corporate Social Responsibility to clean up their image with minor investments and no change in destructive business practice. They recruit private security arms, often acting in collaboration with state militaries, to patrol their territories and enforce the compliance of communities through intimidation, arson, rape, sexual harassment and murder. And they control major media agencies, which play a key role in ensuring the continuity of corporate hegemony. Acting with brutality in the rich countries from which they originate, but especially in countries of the Global South, including those in Southern Africa, major corporations are appropriating more and more of our collective wealth and rights.

Yet, resistance is growing across the world and throughout our region. Every day, there are more communities, movements and peoples struggling against TNCs – often confronting specific companies or sectors and winning important victories. If we are to challenge corporate power and the system that protects and benefits TNCs it is necessary that we come together and offer a systematic response.

We must unite our experiences and our struggles, learn collectively from our victories and our failures and share our analysis and strategies for putting an end to the impunity of TNC’s. We must converge our struggles within and across countries, regions and continents.

We must build on our ways of life, our forms of production, our ways of nurturing and living alongside eco-systems and each other in harmony and with love – it is these ways of being, seeing, relating and producing that are the basis for building an alternative society in which we, the people, are the protagonists.

Dismantling the transnationals’ system of power demands coordinated action at the regional level: engaging in struggles in various spheres and sectors of the economy, combining mobilizations on the streets and in territories with popular education and actions in parliaments, media and international forums and organisations. By creating a powerful movement of solidarity and action against TNCs, their apologists and promoters, we will begin to build a world free from corporate power and greed.

We, the Southern African Campaign to Dismantle Corporate Power, Stop Impunity, and Reclaim Peoples’ Sovereignty, welcome you to join us in collectively building this process of mobilization towards a campaign against the power of corporations and their crimes against humanity. The Permanent Peoples’ Tribunal will take place in three sessions: A first set of hearings in August 2016 in Swaziland, the second in May 2017, and soon after, the delivery of the verdict by a panel of respected judges.

To sign on to the Call to Action or to participate in the Tribunal email ilham@aidc.org.za