Home » We salute the struggle of women, in the countryside and in towns and cities : La Via Campesina

Statement of Solidarity on the occasion of March 8th, the International Women’s day 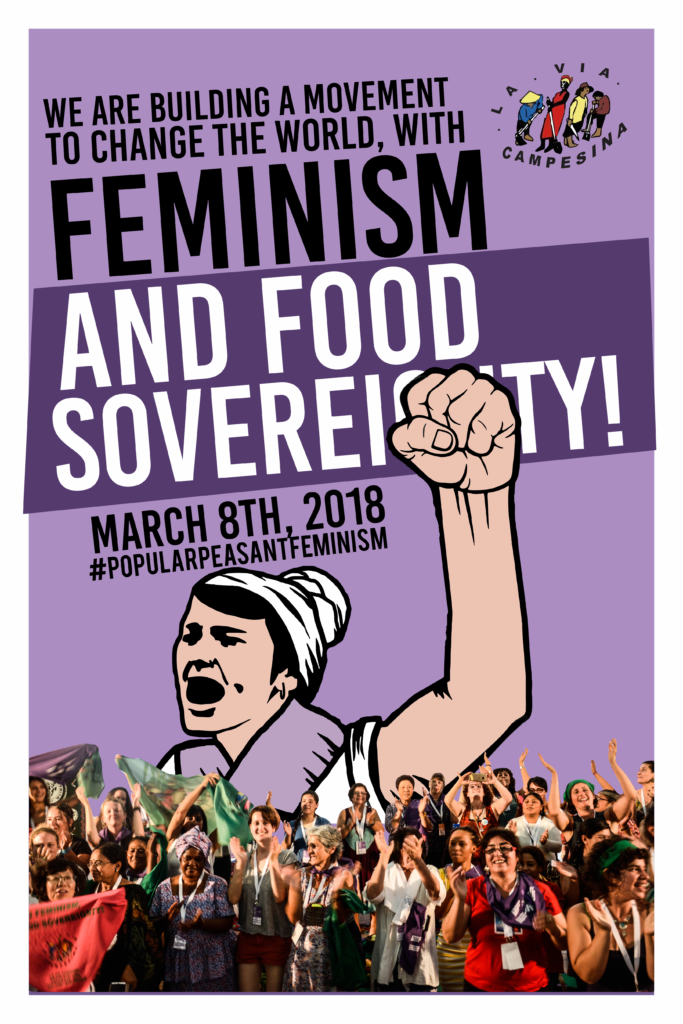 (Harare, Zimbabwe, March 8th, 2018): Today, on International Women’s Day, we, the women of La Via Campesina – peasants, indigenous women, Afro-descendants, mestizas, fishers, pastoralists, women from urban and rural areas, belonging to different organisations with different forms of mobilisation and activism – want to salute the women workers of the world. We send special greetings to women who are struggling and who are fighting, not only to earn their living, but also for political participation, equal rights,equity and for the recognition of our work, our accomplishments and our knowledge in the construction of a fairer world for men and women.

We pay tribute to those women who are engaged in a constant struggle to end violence against women and against all human beings, women who are breaking the silence. We pay tribute to women who confront the structural oppression of capitalism, refusing to accept the ingrained patriarchal patterns in societies where, every day, women are the victims of violence, discrimination, exploitation, oppression and murder. We are called upon to reaffirm the necessity of ending violence against women, our ongoing Campaign to End Violence towards Women that was renewed at the 7th La Via Campesina International Conference in Bilbao in 2017.

We express our appreciation for women who are not afraid to struggle – in very different ways and in a wide variety of cultural and geographical settings – for land, food sovereignty, water, seeds, and agroecology, as well as for education and health services. We admire women who are struggling within factories or in their day to day lives, and all of the women who are fighting for political, economic, and social emancipation. In a spirit of solidarity, we acknowledge and value ourselves, as women who are making dreams come true and constructing new societies, together with the working classes of the world.

We are also aware that we are suffering from a worldwide onslaught from imperialist capitalism, with its intrinsic ties to the conservative and fascist patriarchy, which is constantly seeking to increase the exploitation of our land, territories, and natural resources, a well as to increase the exploitation of women’s work, their lives, and their bodies. Every day, our rights are violated by the actions of transnational corporations that are the root causes of migration, and that generate familial and social conflicts and provide fuel for wars. We are violated and demeaned by prostitution, the trafficking of women, and sexual exploitation. Furthermore, we are criminalised because of our struggles, because we choose life rather than death. We face the constant challenge of confronting domestic violence and assault – be it physical, psychological, moral, or sexual – that all too often end in murder, disappearance, or suicide.

It is in this context that we reaffirm our feminism and our commitment to the struggles for gender parity and for full political participation in all decision-making bodies. We are also reasserting the need for day to day collective practical actions, going beyond speeches and motions, to end violence against women everywhere.

A tribute to the women who gave their lives, in the struggle for the rights of women in different areas, who suffered torture, sexual and moral violations, who were disappeared, imprisoned, beheaded, massacred for defending life, dignity, Mother Earth and the rights of women. We will follow their examples, their traces, legacies that they have left for us in different spaces of work as well as day-to-day lives.

For these reasons, we know that, in order to guarantee respect for our rights, much more is asked of us at this time. We must have the courage to confront that even greater monster which sustains the patriarchy and is the source of all of the injustice suffered by workers all over the world. It is in this spirit that we salute the struggles, the activities, marches, mobilisations, and meetings of the women throughout the world who are confronting the forces of patriarchy and capitalism that threaten the lives of women, nature itself, and the life of the planet.

This is why we say that without feminism we cannot build a new society.

We salute the struggle of women, in the countryside and in towns and cities.

A warm embrace from the women of La Via Campesina to all women who are involved in struggle!

We also have produced posters, social media banners that you could use during the week.