Home » Rio+20: INTERNATIONAL CAMPAIGN OF STRUGGLES: Peoples of the World against the Commodification of Nature 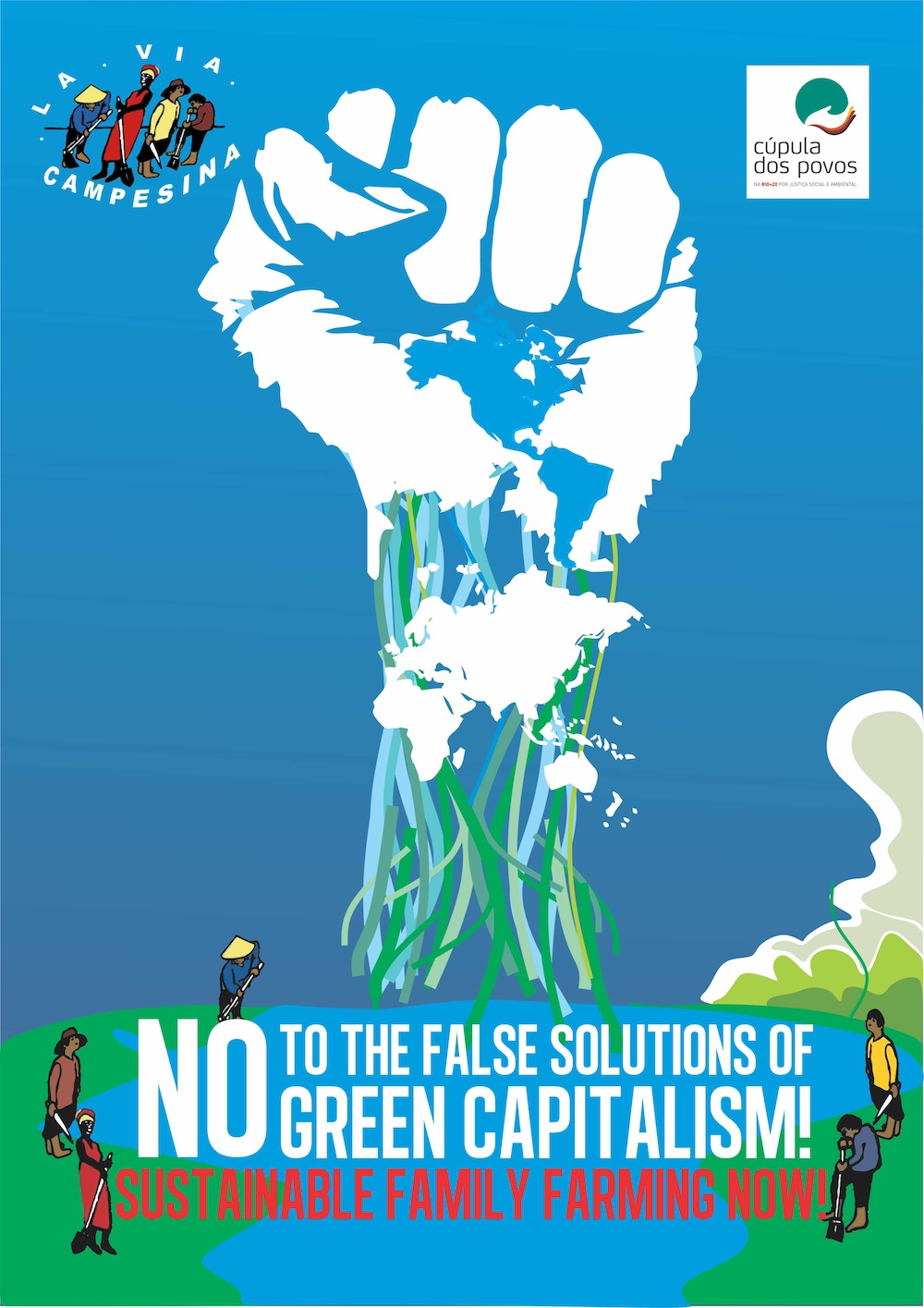 The advance of the capitalist system that has reached unprecedented dimensions in the past two decades is resulting in crises that are of equally unprecedented dimensions. The financial, food, energy and environmental crises are phases of the structural crisis of capitalism, which has no limits in its search for more profits. And, as in other structural crises, it impacts the peoples of the world and not the elites.

In every continent we have seen that even in crisis, capitalism has not reduced its momentum: the increase in land purchases and land grabbing by foreign corporations, the advance of the mining industry, the technology of genetic modification that is ever more present in the rural areas, the marketing of agrofuels and pesticides on a huge scale. Finally, to say that capitalism is in crisis does not mean that the system is in retreat. On the contrary, it is precisely in this moment that it advances with more intensity because the corporations take advantage of the crisis to extend their domination over territories that have not yet been conquered.

The Rio +20 Conference is a clear example. Instead of bringing together all the governments of the world to find real solutions for the environmental crisis, the event will serve to consolidate the false solutions and the appropriation of territories of the peasants and traditional peoples. In the United Nations Conference, only the interests of the large corporations will have a chance.

To resist and challenge these interests, it’s essential that the peoples of the world continue to strengthen their organization and struggles, raising their voices and showing that only people’s sovereignty can ensure true solutions.

So as Via Campesina , we call on our member organizations and allies to organize and carry out struggles all over the world during the entire month of June, with particular emphasis on June 5, World Environment Day, showing our unity and strength to send in advance from all corners of the world a resounding message to the governments that will be at Rio +20 from June 20 to 22 in Rio de Janeiro, Brazil.

Each struggle, each act of resistance, each territory that we retake should be the expression of this global unity in the face of the advance of the capitalist system over nature.

Parallel to the official conference, the people of the world will be meeting at the People’s Summit in a process of collective construction and permanent mobilization. The week of June 18 to 22 wil be a period of global mobilization, since our task is not only in Rio de Janeiro. We should carry out the campaign of struggles in each country, especially on June 20 when the official conference opens. During this period the struggles in all the continents should be echoing in Rio de Janeiro and throughout the world.

We invite all the farmers and peasant organizations and their allies to organize mobilizations and actions throughout the world: marches in the cities and in the countryside, press conferences, actions for land and agrarian reform, media campaigns, radio programs, mobilizations against companies that degrade the environment, discussions in schools and universities, film showings and other actions that can be built collectively in each country.

At a time in which capitalism wants to globalize its system even more, to dominate our territories and exploit our work force, we must internationalize our struggle. Let’s get organized, prepare our actions, mobilize our bases and our allies for this great campaign of struggles against capitalism. The strength of this campaign will come from our ability to organize and get national and international visibility.

We ask you to communicate your activities to lvcweb@viacampesina.org

NO TO THE FALSE SOLUTIONS OF GREEN CAPITALISM!