Home » Rights of Peasants and Other Rural Workers: The Value Added of a UN Declaration 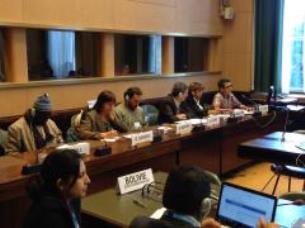 On the occasion of the 30th session of the Human Rights Council, the Europe-Third World Centre (CETIM), FIAN International and La Vía Campesina have the pleasure to invite you to a side event on: Rights of Peasants and Other Rural Workers: The Value Added of a UN Declaration

H.E. Ms. Nardi Suxo Iturry, Ambassador, Permanent Representative of the Plurinational State of Bolivia and other International Organizations in Geneva

Interpretation into Spanish, French and English

Light food will be provided

At the global level, there are currently some 1.2 billion peasants and together with their families they represent one third of humanity. In absolute terms, there are more peasants today than ever before in history. Peasants and other rural workers are key to food sovereignty and the realization of the right to food, in particular in developing countries where they provide up to 80% of the food consumed at the local level. They also play a key role in the fight against climate change and the conservation of biodiversity and seeds.

Yet peasants and other people working in rural areas are among the most vulnerable and discriminated-against group. They are victims of multiple violations of their human rights and suffer disproportionately from hunger and poverty. 75% of the persons that suffer from extreme poverty and 80% of those victims of hunger in the world live and work in rural areas.

Following the recommendations of its Advisory Committee, the Human Rights Council decided in 2012 (A/HRC/21/19) to establish an intergovernmental working group to develop and adopt a Declaration on the rights of peasants and other people working in rural areas. This working group held its first session in July 2013 and its second session in February this year.

The Human Rights Council will now to examine the report of the second session of the intergovernmental working group and decide on the renewal of its mandate. During this side event, the different speakers will explain why it is crucial that the process be allowed to continue and what would be the value added of a United Nations Declaration.