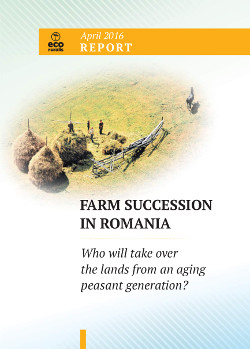 There is a growing crisis facing farms and peasants who work the land around the world. The problem is that peasant farmers are aging and the future of their farms is in jeopardy. It is causing serious concerns about the current state of farm succession.

Globally, the average age of farmers is 60 years,with only slight variations across continents and countries.In Africa the average farmer’s age is also 60 despite the fact that 60% of the rest of the population is under twenty-four. In the United States 84% of farmers are over 45 years old, while in Taiwan a massive 92% are over 45 years old. Europe is no exception, with only 7% of farmers under the age of 35, and half of all farmers poised to retire within 10 years.

La Via Campesina defines a peasant as a person “who has a direct and special relationship with the land and nature through the production of food and/or other agricultural products.” Eco Ruralis uses the term ‘peasant,’ because it includes individuals who are not otherwise recognized in agricultural policies. ‘Peasant’ includes landless people, people who sell their products outside of the family, those with a minimal amount of land, and people whose working of the land is not recognized as an occupation by the Romanian government. As part of La Via Campesina, Eco Ruralis is working to reclaim the word ‘peasant’ and increase its use in the European context.

This report looks specifically at Romania, which reflects the global statistics on aging peasants.

In Romania, 66.4% of peasants are over 55 years old and only 7.3% are under 35 years of age. One noteworthy point, however, is the size of these peasants’ farms. Older peasants tend smaller farms while younger peasants tend larger farms. This is demonstrated by the fact that one third of farms over 100 hectares were run by individuals under 45 years old. At the other end of the age spectrum, 70% of farms less than 20 hectares were run by peasants over 55 years old.

The reason that the average age is still so much older is because of the sheer number of smaller farms. An impressive majority of farms in Romania sit on less than 20 hectares of land: in 2010 these totaled 99% of all agricultural holdings in Romania. Thus, there are many more small-farm holders than medium or large-farm holders. With so many peasants on the verge of retirement or death there is great uncertainty about what will become of their farms, lands, and products.

This report describes the types of farm succession, the reason disappearing farms is a problem, why small peasant farming is highly beneficial, and what some of the obstacles are to peasant farmers.