Home » Rally in Jaipur Against the WTO Negotiations

Jaipur, July 9: Braving heavy monsoon rains, hundreds of small and marginal farmers from 25 districts of Rajasthan took part in a huge rally organised here today to register protest against a mini-ministerial meeting of the World Trade Organisation (WTO) planning to conclude the Doha Development Agreement in Geneva on July 21, 2008.

Farmers, peasants and agricultural labourers, carrying banners and placards opposing the WTO policies, took exception to India’s intention to sign the draft agreement in the Geneva meeting without regard to the food security of the country and livelihoods of lakhs of farmers. 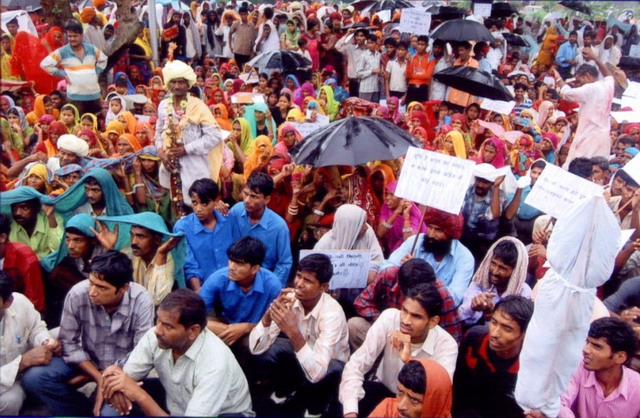 The rally and demonstration were organised jointly by the Kisan Seva Samiti Mahasangh, various groups representing farmers and the civil society organisations, and was supported by the Centre for Community Economics and Development Consultants’ Society (CECOEDECON).

The participants in the long march from the Government Hostel to the Civil Lines railway crossing pointed out that the draft in its present form had not addressed the concerns of farmers and had failed to show any willingness of the developed countries to reduce their trade distorting subsidies.

Addressing the rally Mr. Devinder Sharma Forum for Biotechnology & Food Security, New Delhi said “Despite the Union Commerce Minister Kamal Nath claiming that India will not compromise on agriculture, latest indications are that India has already accepted the draft that is being prepared at Geneva”

The chairperson of the Kisan Seva Samiti Mahasangh, Mr. Badri Jat, and the secretary, Mr. Bhagwan Sahay Dadhich, addressing the demonstrators pointed out that the signing of the draft would make the Union Government unable to take recourse to appropriate safeguard mechanisms to protect the agricultural produce of the country against unfair dumping of cheap imports. Mr. Bhogi Lal Sahariya of Sahariya Vikas Manch, Shahbad, Baran said that “if WTO agreement is accepted in its present form, Indian farmers will be forced to quit farming and turn landless labourer”.

While the two leaders bemoaned that the Union Government had not taken farmers into confidence on the issue before planning to sign the draft agreement, over 3,000 demonstrators drenched in the rainwater raised slogans demanding that India should not sign the agreement if it was not able to negotiate the rights of farmers.

A delegation of demonstrators met the Governor, Mr. S.K. Singh, to submit a memorandum addressed to the Union Government on the issue. The Governor, expressing his solidarity with the farmers, said the farmers should organise themselves in a better way and exert pressure on the Government through intense lobbying to protect their interests in the WTO negotiations.

The memorandum expressed concern over the fact that the State Government had so far not shown any concern over this critical issue affecting the farmers even though the agriculture was a State subject under the Constitution.