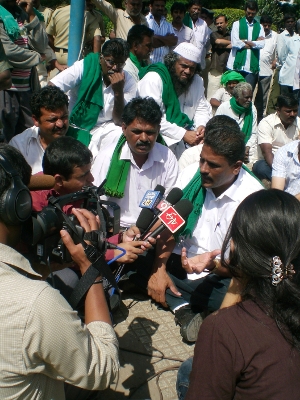 We Indian farmers movements under the banner of the ICCFM comprising of farmers organizations from all over India such as Karnataka Rajya Raitha Sangha (Karnataka), Bhartiya Kisan Union (North India), Thamizhaga Vivasayigal Sangam (Tamil Nadu) and Kerala Coconut Farmers Association (Kerala) are protesting on the occasion of the COP 16 climate negotiations of the UNFCC in Cancun, Mexico.

We stress that the climate negotiations have totally failed to bring about any real solution to the climate crisis and ever since the last UNFCCC meeting in Copenhagen it has become even more clear that any real change will only come from  a peoples movement and not diplomatic negotiations.

On the one hand the US and other industrialized countries have tried to hijack the negotiations by promoting  the bogus “Copenhagen accord” letting themselves set their own voluntary actions instead of agreeing to scientific emissions cuts. On the other hand the negotiations have turned into a huge market place for corporate profit generation through false solutions like REDD and CDM.

The real cause of climate change is the unjust economic system based on inequality, unfettered consumerism and unchecked extraction of mother earth’s resources. It is this greedy system that needs to change and not the climate! India’s poor people are the most vulnerable and that is why it is urgent that the Indian government stop hiding behind the low per capita emissions of the poor while the elite in this country continue to pollute at US levels. India needs to first address the inequality in this country and stop its development model of high-consumption and high-emission. India is instead promoting false solutions like agro-fuels, that displace food crops in a situation of hunger and proposing untested “climate ready” GMOs that threaten our food security, health, ecology and farmers rights by strengthening corporate power over our food and agriculture. CDM in India is dominated by polluting industries that harm communities and ecosystems and pollute our water while earning money through non-verifiable and mostly false claims of emissions reductions.

Thousands of farmers and peoples solutions to the climate crises do exist everywhere and these need to be heard at the undemocratic UNFCCC process which is instead catering to a few corporate-driven false solutions.

When it comes to agriculture the solution is obvious. Agriculture itself contributes up to 22% of carbon emissions which is more than the global transport sector. But it is only a certain type of agriculture that is the main cause and needs to be discouraged – industrial agriculture. The peasant based model of small holder ecological farming that millions of India’s farmers practice is itself a solution to climate change. Instead of aggressively promoting green revolution type agriculture which is high on inputs like chemical fertilizers and pesticides, consumes high levels of fossil fuels and water and leads to soil degradation and biodiversity loss, the government should promote and further develop traditional and agroecological alternatives that farmers have originally been practicing for thousands of years. Sadly, the government allocation of funds to sustainable farming has been minimal. The Indian government is actually in the process starting a second green revolution in east India. This green revolution model is actually displacing farmers traditional knowledge much needed to combat climate change. Agroecology on the other hand is more efficient than industrial farming; it also revives soils, conserves water, protects biodiversity and provides healthy and chemical free nutritious food. Most importantly it cools the planet!