Home » Press Release: Peasants in Asia give inputs to ‘UN Declaration on the Rights of Peasants & Other People Working in Rural Areas’

Henry Saragih, Chairman, SPI said that Peasant Rights which was declared on 20 April 2001 in Cibubur, West Java, will become a universal declaration of the United Nations (UN) in the near future. 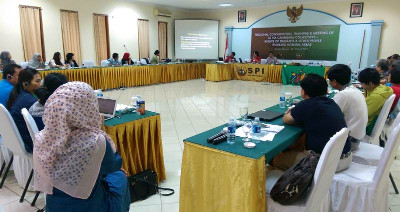 “This event also aims to build capacity in peasants to be able to understand the UN process, working together at the national level, working together to make regional report on violations of the rights of peasants, and  responding to cases. This event will also decide on the mechanisms to follow-up at regional and national level over the next two years,”said Henry, who is also member of the International Coordinating Committee of La Via Campesina Southeast Asia and East Asia.

Minister of Village, Rural Development and Transmigration Marwan Ja’far was the keynote speaker at the event. In front of over hundred participants representing the peasants from Indonesia as well as from countries of Southeast Asia and East Asia, he stated, “For the fulfillment of Peasant Rights and other people who work in the rural areas, we will encourage villagers to have the authority to organize, manage and supervise the natural resources including fertile agricultural lands-the agrarian reform-that said the peasants “.Hailing the achievements of peasants and villagers who reached the UN Declaration on the Rights of Peasants and Other People Working in Rural Areas, the Minister congratulated them and wished that this declaration materializes soon.

“It is already there in Nawa Cita (nine principles programs of President Joko Widodo) and programs of the Ministry of Rural. So let us all – the government, the peasant organizations, civil society, peasants, fishermen, women and youth come together to realize, protect, uphold and empower peasants and rural communities,” added Minister Marwan Ja’far.

Meanwhile, Bonanza Taihitu Officer, Directorate of Human Rights and Humanitarian Affairs, Indonesia Ministry of Foreign Affairs shared that SPI and Ministry of Foreign Affairs have been intensively communicating  with regard to to the development and progress of the declaration of Peasant Rights at the United Nations. Moreover, preparations are underway for the meeting at the UN Human Rights Council that is coming up in May 2016.

“It’s a good practice, to be emulated in many other countries: where the civil society and the government could cooperate like this,” he said. At the same session, the Director of Bina Desa Foundation Dwi Astuti stressed on the rights of women peasants.

“Women peasants are often victims of the most severe in discrimination against peasants. Yet women peasants have a very big role in the food production process, the involvement of women peasants have become one of the important issues to be formulated in all aspects of the protection of the peasants, “ she said.

Appearing via video conferencing was Nardi Suxo Iturry, Ambassador of Bolivia – who is also the Chair rapporteur for the Intergovernmental Working Group who discussed the draft UN Declaration on the Rights of Peasants and Other People Working in Rural Areas. She stated that this declaration is a victory for peasants.

“Why do I call this a victory? Because the initiative and the struggle of civil society have succeeded in convincing for countries to adopt a declaration that protect peasants and other people working in rural areas, “she added.

Given the importance of the fulfillment of Peasant Rights, the results of this Peasant Rights Training will be taken into consideration in the meetings of the UN Human Rights Council and the Intergovernmental Working Group.

“Peasants expect that the UN Declaration on the Rights of Peasants and Other People Working in Rural Areas is soon legalized so that the protectionand empowerment of peasants will be increasingly possible across the globe”, added Henry Saragih.