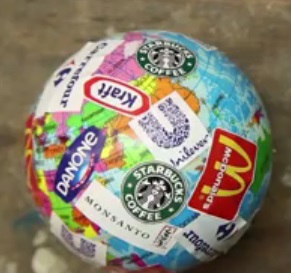 (Harare, 9th of July 2015) La Via Campesina strongly decries the fact that international policies and legislative processes which supposedly are decided upon democratically and by the citizens are increasingly dominated by the interests of large multinational corporations, with the connivance of the governing classes[1]. Furthermore, while existing structures allow the crimes committed by these same transnationals to go unpunished, there is a growing incidence of criminalisation of those who are struggling in defence of human rights.

At the international, regional, national, and local levels, it is more and more apparent that legislative frameworks are being designed, interpreted, and implemented so as to respond to the interests of large transnational companies – to the detriment of the common good and despite the resistance of social movements and organisations that are seeking different paths. This situation is compounded by a lack of transparency towards civil society.

For example, the international trade agreements, of which the TTIP, the TPP, the CETA, the EPAs and the TISA are some current examples – with their investment protection clauses, the deregulation of trade and production, and the jettisoning of social, health, and safety standards – respond to the requests of the transnational companies rather than to the interests of the world’s peoples.

A permanent confusion is created in the roles of the entities representing civil society and the  public interest and the entities that are defending private interests. The multinationals are treated as though they were social actors, when in reality they do not represent anyone other than the shareholders for whom they seek to gain profits. Consequently there is a considerable reduction in the public space.

In addition, new mixed entities are created and accorded active support: the round tables or platforms that are composed of multiple actors such as governmental institutions, research bodies, donors, NGOs, and civil society organisations. These new spaces provide no guarantees, and even less support, for the autonomy of social movements; positions necessarily become diluted and what is really happening in the field is hidden. We can cite the example of the ILC (International Land Coalition), an organisation that has received an increase in funding in recent years and which, in an opportunistic manner, presents itself alternatively as a research body, a donor, or a representative of civil society. In fact, it calls for mitigating the negative effects of landgrabbing, rather than insisting that landgrabbing be stopped.

As a social movement of peasants and farmers, farmworkers, landless people, and indigenous peoples, we are confronting a short-sighted and ultra-capitalist vision of the world based on the paradigms of growth at any cost, the capacity of the market to control and resolve everything, and the imposition of a Western development model. This model includes the privatisation and commodification of common goods and of fundamental rights such as the rights to water and food. It includes the denigration of social movements and the cult of business as the only “useful” social actor. The quest for private profit is the dominating factor in decision making and in its vision of the world. A patriarchal, capitalist, individualistic and Western vision of well-being is being actively promoted, bringing in its train uniformity in a global market. In this way, the responsibility and the role of States are reduced and seen as obsolete. There is a corresponding reduction in the capacity for action and influence of grassroots actors.

New markets are being established, supposedly in order to resolve the problems that the market itself has created. A simple example of this are the (REDD) carbon emissions markets, which, rather than reducing carbon emissions, have led to speculation, the forced displacement of communities, and more pollution. Techno-fixes such as GMOs and fertilisers are being actively promoted, and there is a lack of analysis of the powers and interests at play as well as a lack of a long-term vision. Markets for social problems are created, for instance the social register markets involving people who have been negatively affected by dams. These show how even social problems end up by becoming markets. We must also mention the public-private partnerships (PPPs) in which companies replace states through obscure arrangements that only benefit those same companies. By means of orchestrated land and seed laws, the common goods managed by the communities, land, water, seeds, and our territories, are turned into commodities under the dictate of land titling programmes and patents on life. Thus people are dispossessed of the very rights that guarantee the future of the planet and of humanity.

Initiatives claiming to contribute to “the fight against hunger in the world”, such as the New Alliance for Food Security and Nutrition (Nasan) which is supported by the G8, and the Alliance for a Green Revolution in Africa (AGRA), are taking place with the complicity of Western states and through pressure on many countries. These initiatives are integrated in an insidious manner into national and subregional agricultural development programmes, in order to impose a Western model of agriculture and the introduction of GMOs and products that are prohibited in the  countries concerned – and to monopolise their natural resources such as land and water.

Due to pressure to maintain the status quo or to a fear of restricting the profits of the few, there is a continuous lack of structural and sustainable solutions.

We are seeing an increase in the criminalisation of trade unionists, environmentalists, and peasant farmers who are struggling for their human rights or for the rights of Nature. In Honduras alone, hundreds of women and men peasants have been put on trial for defending their rights. In recent years, there has been a marked upsurge in incidents of violence against environmentalists[2].

We note the importance of opening up the international policy spaces to grassroots organisations, and of developing mechanisms, to be led by these same social movements, for consultation, the provision of transparency, and the dissemination of information. At this point, let us mention the positive example of the Declaration of the Rights of Peasants and people working in rural areas that is being drawn up by the United Nations Human Rights Council[3].

We need new transparent, participatory, processes of democratisation that are open and clear to all, and that, instead of oppression, allow the expression of the sovereignty of the peoples in the world of today.

We need legally binding national, regional and international mechanisms to put an end to the crimes against humanity perpetrated by transnational companies. In this sense, we welcome the initiative in the United Nations Human Rights Council, which aims to adopt a binding Treaty, and we support the Campaign to Dismantle Corporate Power[4].

We recognise that the role of States is to represent the interests of their peoples. Therefore, the State has an obligation to oppose any policy or international treaty that diminishes human rights and undermines its own sovereignty. The sovereignty and responsibility of States need to be strengthened and not undermined at the international level.

We in La Via Campesina have chosen food sovereignty as a utopia in rebellion against this exploitative system. Day by day, we are building our alternatives in solidarity and from the grassroots.