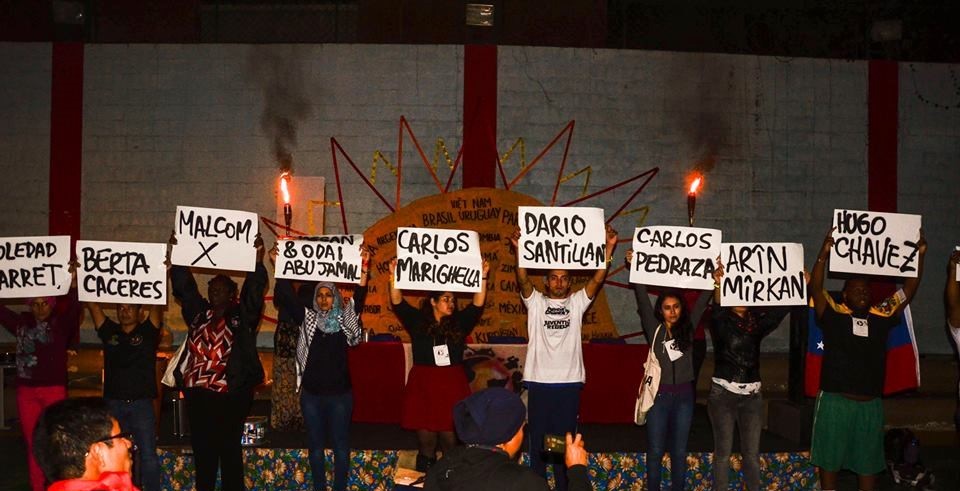 We come from 43 nations, and 4 continents. We have different cultures, life experiences and we speak different languages. Although this diversity, there is something that unites us beyond being part of the same generation: the systemic violence that we all are subjected. This condition conforms to our identity that expressed internationally in the struggle, as a form of resistance from youth to imperialism.

We live in a period of multiple crises, which calls into question the capitalist system, as we know it. Witnessed the worsening of the global economic crisis, which began in 2008 in the center of the system, and now spreading globally, causing a brutal increase of unemployment, poverty, massive immigration flows. Despite the wars promoted by imperialism as a means of accelerating economic activity and expand the domination and exploitation of territories and resources, there is not a way out of perspective to this crisis. With this, the violence of capital enhances the social crisis, causing police repression, genocide of the poorest people, especially the youth.

This economic crisis impacts further our ecosystem, endangering the survival of the planet. The unbridled and unremitting exploitation by transnational companies seeking the recovery of their profits accentuate the environmental crisis.

Furthermore, we are experiencing a political crisis in that state institutions lose legitimacy in society as increasingly less answer the demands of the population. This political crisis is also evident in the state’s inability to regulate the economy. Therefore, what we see is a minimal or no participation of people in decision making about the direction of society and the dominant capital presence in the spheres of power. The combination of these dimensions affects human values, which is passing over by anti-social values such as greed, individualism, consumerism and selfishness.

Thus, as the bourgeoisie finds it difficult to build solutions to this critical situation, the popular forces cannot present an alternative project for society. However, this challenging scenario brings with it the possibility of changes, size, and the degree of system instability. It is up to us, the struggling youth, to build a project to confront imperialism and overcome the capital violence. In times of change that decides the direction of the company is the ability to do mass struggles and develop organizational processes of people.

Given the imperialist offensive more than ever it is essential to building solidarity among peoples. In this sense, the consolidation of international articulation Struggling Youth becomes imperative. If our enemy operates globally, we cannot resist locally, we need to build processes of struggle facing the system worldwide.

After share our analysis of reality, experiences of struggle and resistance, we point to the following common definitions:

Conform a provisional coordination collective for this process of articulation, which includes the diversity of our organizations, regional / continental representation.

a. Build national meetings until the end of 2016, seeking to expand the participation of more organizations that identify with this Policy Statement;

c. Identify a country and their organizations who are willing to receive the next International Youth Meeting in wrestling, and has possibilities to realize it.

On October 8, when Che Guevara was killed -internationalist fighter who inspires our generation will convene an “International Youth Day on Fight against violence of capital”.