In a statement released last night, one of northern India’s largest farmers’ unions – Bharatiya Kisan Union – has condemned the criminalisation of protesting farmers in Mandaur district of Madhya Pradesh. One of the unions local leader, Anil Yadav has also been arrested by the police and BKU has called the action unwarranted and in violation of their rights to protest.

According to the release, Anil Yadav was picked up from his home and false cases were slapped on him before being sent to jail.

At a meeting of the leadership held at Mahipalpur in Delhi, the Union has shot off a strongly worded letter to the Prime Minister, urging him to implement the Swaminathan Commission’s recommendations that called for higher support price for agricultural produce. Despite the promises, the Government has been dragging its feet on its implementation, the leaders allege.

They also pointed to the rural distress caused by back-to-back droughts and increasing debt, which has forced several thousand farmers to commit suicide and several more on the verge of it. In this context implementing the recommendations of Swaminathan Committee becomes crucial and necessary.

The leaders expressed their anger and disillusionment for being criminalised for protest and demanded that everyone be released from jails immediately and that responsible police officials who shot dead at least five of the protesting farmers on Tuesday (June 6), be brought to justice.

The statement reminded that the farmers have been protesting in several parts of the country for long – by throwing their produce on the streets and dumping milk in the open – desperate to garner attention to their abject plight. Yet, neither the State government of Madhya Pradesh nor the Government at the Centre paid any heed and this has forced the farmers to take to the street and the escalation of tensions.

The union has warned that if the assault on farmers do not end and if the people responsible for murder are not punished, they would widen the protest and block the roads across the country.

According to latest media report available, the curfew imposed in Mandsaur has been lifted, but the protests has spread to other parts of the state. In the neighbouring state of Maharashtra, simultaneous agitations led by farmers are taking place. 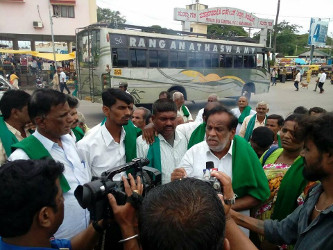 In the south, Karnataka Rajya Raitha Sangha, one of the largest unions have also staged marches and protests in solidarity with the farmers of Madhya Pradesh and Maharasthra – all the while demanding that the governments in their region take immediate seops to address the rural distress. South India is facing one its worst droughts in decades and until last month, several farmers from Tamil Nadu were agitating on the streets of Delhi.

Farmers protests: What is Swaminathan Commission Report and how is its implementation relevant?