The issues raised at the Asian Peoples’ Summit against Asian Development Bank (ADB) in Bali, Indonesia, focus on how to build a real alternative development in Asian society. It is very crucial because both ideologically and practically, the ADB programs and loans are not a solution to the current food, energy, climate and financial crises. On the contrary these programs and loans are widening the injustice gap, especially affecting the most vulnerable groups such as peasants, fisher folks, workers, and women. 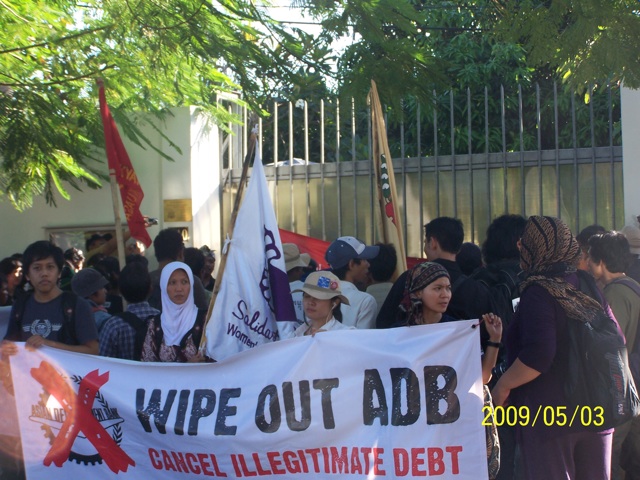 “We actually already created solutions to fund our own development,” claimed Arkom Trekaew from Assembly of the Poor, Thailand, a Via Campesina member. The development of cooperatives at village and district level is a form of capital consolidation for peasant’s agricultural production. “Another experience we can see is micro-financing and savings cooperatives that trigger solidarity among rural communities to fund the development in their areas,” Arkom added.

Changes in the development paradigm are also crucial. “Since Independence, Indonesia’s productive land redistributions should be the basis of a rural agrarian-based economy,” said Syahroni from the Indonesian Peasant’s Union SPI, member of La Via Campesina. With this kind of capital, he said that some peasants in Bogor have a very valuable experience. By receiving their rights over land via land reform, peasants have been able to organize themselves in real economic activities. “Organic farming in Bogor in an area of one hectare can provide 6 peasants with an income equal as minimum wages,” he said. And they build this from zero. “Right now, the cooperative is running and the production and distribution process has been able to fulfill peasants food sovereignty,” he said further.

Nevertheless, mere economic solutions can not completely redress current injustice and inequalities. “There has to be political decision to support alternative effort,” according to Gautam from the organisation Nadi Ghati Morcha, India. Political solutions refer to the changes in the development paradigm and the implementation of  food sovereignty in government policies, starting from the lowest level to the national level. Political decisions should return to the people in order to have government’s policies in line with people’s voices. “This will be in line with the development and the enhancing of democratic system,” said Gautam.

Shalmali Guttal, a researcher at Focus on the Global South said, “The top-down model that has been used all this time has failed in building alternatives.” People should build their own alternatives and strengthen them within their communities from village level up to national level. “The bottom-up model such as cooperatives, community organizing and solidarity should spread wider to national and even international level,” said Shalmali.

Development funding alternatives should be based on solidarity. Funds could be collected from the community through progressive taxes to subsidize the needs of the poor. Goods and services exchange produced at village level should also take into account what is called “the redistribution of wealth”. Therefore there will be solidarity among each components of the community, and there will be a guarantee that the production of goods and services continues. The guarantee of production will then contribute to the economic sovereignty of the community and the country.

These practices are not just imaginary. “Many alternatives are actually already implemented by social movements. Governments and people around the world should learn from these practices to redress the existing global economic and political practices that are very destructive,” said Shalmali firmly.