The international peasant’s movement La Via Campesina is inviting the media to cover the protests activities during the World Bank/IMF meetings from September 15 to 19 in Jakarta, Batam, Medan and Singapore. 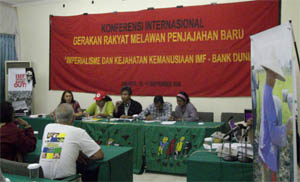 Farmer’s movements have been opposing World Bank and IMF for decades because of the disastrous impact of their policies on small farmers lives. La Via Campesina members organisations around the world have struggeled against those institutions due to land evictions for mega-projects (such as large dams), land and water privatisation, cuts on public subsidies to farmers, huge debt, free trade policies…

La Via Campesina is an international movement which brings together millions of peasants, small producers, landless people, rural women and agricultural workers around the world. Our movement is made up of 132 member organisations active in 56 countries in Asia, Africa, Europe and the Americas.

International conference : “Neo-colonialism and crimes against humanity by the WB/IMF and building a world without World Bank and IMF” (organised by La Via Campesina with the Indonesian People movements against Neo-colonialism)

Press conference La Via Campesina: “Proeple movements protest against the crimes against humanity by the World Bank and the IMF”

15-18 September: International Peoples Forum vs the IMF & WB in Batam

19 September – 9 am : La via Campesina Press conference in Singapore.

09:00 Opening speech:Neocolonisalims and crimes against humanity by the WB/IMF

09:45 Crimes against humanity by the world bank and the IMF from the persfective of human rights and justice. : Johson Panjaitan (PBHI ) , Rafandi (HRWG )

11:00 Press Conference of La Via Campesina

11: 00 Alternative on development and finance

Friends of the Earth