At CBD COP 14, La Via Campesina joined our allies MAELA as part of the International Planning Committee for food sovereignty (IPC) of which we are members.

We were the only family farmers and small food producers group at this COP. 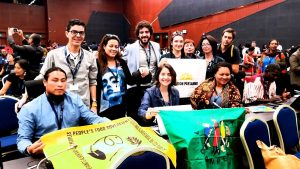 At this COP, a key discussion was on CBDs Strategic Plan post-2020 – planning for CBD action plan until 2050. IPC hopes that this 2050 agenda will support the realization of the objectives of the Convention in a strict relation with indigenous and peasants social movements.

Some of the key issues that we were following at this COP were gene drives, synthetic biology, and digital sequencing which were all being discussed by member states. All these technologies are being promoted under the guise of ‘public good’ by vested interests like the military and corporations such as the military research agency of the United States government (DARPA), the Bill and Melinda Gates Foundation, The Tata Trusts and the Facebook-backed Open Philanthropy Project. But, the ETC Group reports that their interests lie in agribusiness.

For example, Gene drives aim to propagate genetic material, such as a gene that promotes sterility, across an entire population, potentially wiping out an entire species. A project called Target Malaria is pushing for this invasive technology, designed to eliminate malaria-carrying mosquito by spreading 10 000 genetically modified “sterile male” mosquitoes in Burkina Faso. The reality is we don’t know anything about these technologies and the CBD itself promotes the idea of ‘precautionary principle’- which means total precaution must be taken until there is clear scientific understanding of impacts. What if such characteristics spread to other species- animals, plants that humanity relies on for food? What will happen to farmers who rely on these species to grow food? The technology poses a serious threat to our health, land, biodiversity, rights, and food supply.

Such Technologies that originate in the laboratory, such as GMOs and now gene drives, ignore deep seated injustices and power imbalances which require political answers and democratic scrutiny, rather than technical quick-fixes.

At this COP, only Bolivia maintained a strong line in support for a full moratorium on gene drives, while Brazil, Canada and most African countries supported research bodies to self-regulate how they release genetically edited populations. African countries who were previously vocal seemed to fall in line with the Biotech industries position.

Geneviève Lalumière, a youth farmer from the Union Paysanne of Quebec, who is also part of a seed saving collective, made an intervention on our behalf at the discussions on synthetic biology. She urged for a moratorium on gene drives and said that

“I dedicate my life to safeguarding the skills of craftsmen and peasants and to the development of peasant seeds with free pollination. It is imperative that local, peasant and indigenous communities be consulted, listened and taken into account at all stages of the process. For us, genetic forcing technologies are technologies of mass extermination, which directly endanger our food sovereignty. We support a moratorium on genetic forcing. After Terminator, this is the exterminator.”

In an interview, Geneviève said, “they are trying to solve problems caused by the industry with other industrial processes.” 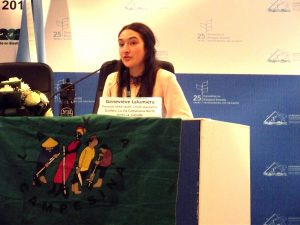 We also organized a side event Friends of the Earth International, ETC Group, where many including members of African civil society spoke about the threats of gene drive technology to local communities, food sovereignty and biodiversity.

The issue of Digital sequencing information is of major concern to us because of its potential support to bio-piracy. Rapid advances in sequencing and synthesizing DNA mean that ‘digital’ biopiracy is now possible. This raises questions about fair and equitable benefit sharing- what if genetic information of farmer varieties are taken by a corporation to create new life forms? This would mean biopiracy, and such processes must be strictly regulated.

Our key demands with regard to digital sequencing were that Antonio Gonzalez from Guatemala and member of MAELA, made an intervention on our behalf at plenary discussions.

He said that “Digital sequencing information, together with the rapid development of synthetic biology techniques, can lead to the patenting of seeds and plants (such as medicinal plants) that local communities and indigenous peoples use for their food sovereignty and health”

He then, for this reason, asked that: 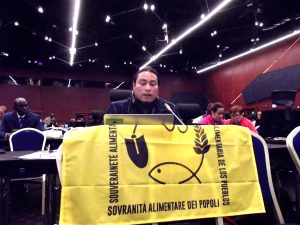 Marciano da Silva of Brazil’s Movement of Small Farmers (MPA) said that “We already have real solutions like agroecology which are proven to contribute significantly to the CBD agenda of conserving biodiversity. We are already feeding the world with the use of our peasant seeds. Corporations want to use technologies like gene drives to patent the traits developed by peasants- it is biopiracy .”