Home » Peasants are under the thumb of free market 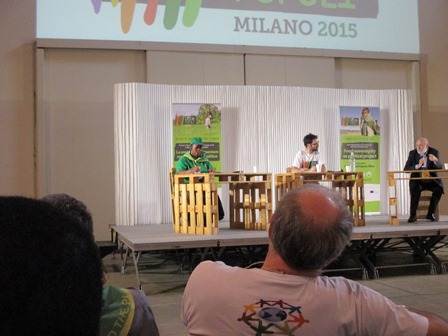 Carlo Petrini at People’s Expo: “Peasants are under the thumb of free market”

Tomorrow, last day of the peasant summit, the final output document will be presented

(Milan, June 4, 2015) – “We are living a paradox: the good and healthy food is not a right for everyone, but only for rich people. This is because the so- called free market actually is not free at all, it can be compared to a chicken coop where foxes are left free to enter and slaughter “. This is what Carlo Petrini, founder of Slow Food International, said today at People’s Expo, an international forum of civil society and peasant movements ongoing at La Fabbrica del Vapore, in Milan, until June the 5th. “We know foxes, far too well”, said Petrini: “they do big business on the backs of the humble, peasants, fishermen and small-scale breeders. Local realities are under the thumb of free market, while they should be protected not only because they feed the most part of the people but also because they are preserving biodiversity”.

During this second day at Peoples Expo – which has brought together over 180 delegates of peasant movements from more than 50 countries – Carlo Petrini met Elizabeth Mpofu, peasant from Zimbabwe and general coordinator of the peasant movement La Via Campesina, in a debate entitled “Preserving biodiversity and ensure access to genetic resources for peasants and peoples”.

“Peasants are the best researchers of our time” said Mpofu. “The challenge that we have to win is to become again owners of deciding what and how to produce, without allowing others to do it for us. This is food sovereignty: defend the indigenous seeds, knowledge and farming practices, as well as our ancestors have always done”.

The final works of Peoples Expo will be held tomorrow, Friday June 5th, from 14h00 onwards. Among the most eagerly-awaited lectures is that of Ibrahima Coulibaly, peasant leader form Mali, scheduled at 14.30. Coulibaly is founder of the National Coordination of Peasant Organizations of Mali (CNOP) and will bring his testimony about the establishment of the new agricultural law in Mali and the recognition of the right to food sovereignty.

At the end of the forum a final document – endorsed by the 50 Italian NGOs and civil society associations along with the 14 international peasant movements and networks who participated in Peoples Expo – will be presented. “The final document will be the result of the work of these days and it will outline the 10 major ongoing struggles to feed the world sustainably, respecting human rights, biodiversity and the limits of the planet. These struggle need to be fully shared by citizens and governments worldwide“, announced Giosuè De Salvo, spokesman for the Peoples Expo Committee.