Home » Peasant networks and the future of food

“Peasant and indigenous farming is the only kind of agriculture that can respond to the great dilemmas of humanity: interrelated crises involving food, the environment, energy, and urbanization,” explained Valter Israel da Silva, of the Movement of Small Producers (MPA), a member organization of La Via Campesina in Brazil, during the Elikadura 21 encounter. Despite the forceful nature of his message, Valter spoke with a calm voice. It is not a slogan, but rather his conclusion after 25 years of movement experience in La Via Campesina, including the many years of collective analysis with allied organizations and critical academics that have contributed elements to his understanding.

It is also the central question of the Colloquium “The Future of Food and Challenges for Agriculture in the 21st Century,” which took place in Vitoria Gasteiz from April 24th to 26th, organized by Initiatives in Critical Agrarian Studies (ICAS), Transnational Institute (TNI), Etxalde and EHNE Bizkaia—Via Campesina. The encounter brought together more than 450 researchers, academics and members of peasant movements, fisherfolk, herders, feminist organizations and urban groups of conscious consumers, among others. 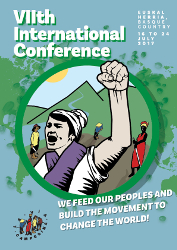 It was another step towards the 7th Global Conference of La Via Campesina, which will take in Derio in July, 2017. With 164 organizations in 73 countries of five continents, La Via Campesina is the largest peasant organization that has ever existed. Unai Araguren, of EHNE-Bizkaia, clarifies that “we are not ‘small producers’ but rather those who feed the majority of the world’s population with healthy food, provide jobs, health, culture and enhance biodiversity. Additionally, we resist in our places, giving life and culture to our peoples, despite the hostile policies that we face. We are great, not small.”

Some 70% of the food consumed globally is produced by peasants, herders, artisan fisherfolk and urban gardens, despite these sectors controlling only a quarter of the planet’s land. The industrial food chain, dominated by transnational corporations that control food from seeds to supermarkets, uses 75% of the land and 80% of the water and fuel used in agriculture. Additionally, the corporate food system is the major contributor to climate change (emitting from 44 to 57% of all greenhouse gases), and produces commodities rather than food. Up to one-half of what is produced by the corporate agricultural system is lost as food waste, or junk calories. Industrial food is linked to the main illnesses of people and the planet.

Peasants, fisherfolk, and herders have suffered as their contributions to feeding humanity, generating employment and sustaining cultures have gone unnoticed. La Via Campesina has already changed this situation and will continue, as Unai Aranguren says, “feeding our peoples and building a movement to change the world.” Food is a task for each and every person on the planet, as is providing support to the building of a global movement.