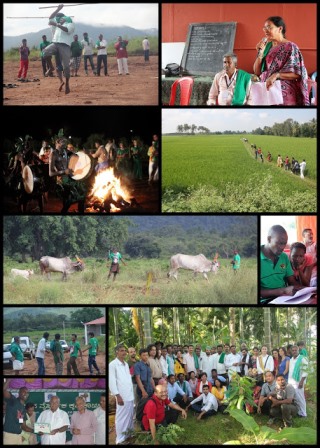 Last month, a group of more than forty international activists from more than ten countries and four continents joined local farmers at Amritha Bhoomi. Amritha Bhoomi is the La Via Campesina Agroecology School for South Asia, located in Chamrajanagar, Karnataka, India and is an outcome of peasant struggle carried out by LVC member Karnataka State Farmers Association (KRRS). The international farmer-activists spent 5 days learning the Zero Budget Natural Farming (ZBNF) method directly from its propagator Shri Subash Palekar. ZBNF method has achieved popularity in the farming community across India, including Karnataka. Below please find some of their reflections.

The ZBNF method of farming, promoted by Shri Palekar and thousands of farmers practicing this method, reminds us of indigenous methods in our countries, passed on from generations to generations. We are reminded, as Masanobu Fukuoka thought, that Nature is our teacher and humanity must learn to ask her questions. We believe farmers are especially skilled in interpreting Nature’s responses, which vary based on agro-climatic regions. Thus, farmers are key in the production of time-tested knowledge that protects and strengthens biodiversity, and therefore life itself. We must ensure that this peasant knowledge spreads through our networks, movements, schools and communities.

The ZBNF method of farming gave us solid, scientific and tested grounds to answer the allegation of the mainstream industrial agriculture. We are returning home enriched!

We especially appreciate Shri Palekar’s commitment to changing farmers’ mindsets. He spends quality time not only on technique, but also on philosophy. From experience we know that changing farmers’ mindsets is difficult. His workshop increased our confidence in mobilizing farmers, and also inspired us about the positive role a charismatic, accessible, and down-to-earth teacher can play in the propagation of peasant agroecological methods.

We also appreciate Shri Palekar’s commitment to rural autonomy and local economies. His commitment to demarketization of the mind, combined with his pedagogical methods described above, will have lasting effects on rural communities. We must reduce farmers’ dependency on the market, especially those who are in very precarious and vulnerable positions, and we return to our homes with renewed confidence in doing so.

We plan to carry the ZBNF method to our countries – testing, adapting, growing and feeding back as required. Though direct replication will be a challenge, it is our task now to localize the ZBNF method and translate it to our contexts, and spread whatever learning we produce among our movements. For example, in Sri Lanka, LVC member MONLAR along with other local organizations have already shared success of ZBNF in their country: translation of books into their language; independent research and scientific validation of ZBNF principles; spreading of ZBNF among male and female farmers, including landless laborers from tea plantations. In order to carry forward this plan, we commit to holding ZBNF workshops in Bangladesh, North India, and to further publications and translations of ZBNF books.

We see the potential of ZBNF to truly help farmers facing agrarian crisis, such as farmers in Bangladesh who prefer to ‘dump’ their unsold produce than transport it home, as they cannot afford the return journey. ZBNF is also especially critical in India where an epidemic of farmer suicides derived from market dependency and cash crop dependency affects all of us, especially Karnataka. Such crises face rural communities on the international level as well, and in our struggle constructive methods such as agroecology are indispensable.

To spread agroecology we must develop the organizational structures of our movements. For example, leadership structures for natural farmers’ wings, and commitment by all members of the political leadership to carry out agroecological methods in their fields!  We want also to support through our organizations the strengthening of a solidarity economy: through local markets, solidarity networks of producers and consumers, etc.

Agroecology will be carried forward as “emerging agriculture” in the face of industrial agriculture by none other than rural youth. Their protagonism in our struggles must be supported and respected in order to develop their economic, social, and cultural resilience.

We continue to link our peasant resistance and knowledge with the resistance to the destructive forces of industrial agriculture. For example, we resist the growing push for more GMOs in many of our countries (and in India in particular with the current struggle against commercialization of GM Mustard). We also continue our activism on other pressing issues such as energy and climate disruption. On climate disruption we are preparing our mobilization for the coming COP 21 Paris conference: as La Via Campesina says – Peasant Agroecology cools the planet! We must carry this message and face against the forces of green capitalism that attempt our co-option.

Finally, we leave our well wishes with Amritha Bhoomi agroecology school of La Via Campesina – South Asia, a place where the strength to combat the agrarian crises can be developed, potentialized, and internationalized!
Signed,
Participants ZBNF Training at Amritha Bhoomi
October 28-November 5, 2015