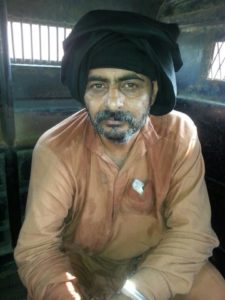 A photo of Mehar Sattar after he was locked up in High Security jail.

In a statement issued on August 23, the Pakistan Kissan Rabita Committee, a member of La Via Campesina in South Asia, has condemned the continued ill-treatment of peasant leader Mehar Abdul Sattar in prison since April 2016.

Mehar Abdul Sattar, the general secretary of Anjman Mozareen Punjab (AMP, Tenants Association Punjab) and also Pakistan Kissan Rabita Committee, is a peasant leader who has been at the forefront of the struggle for land rights at Okara Military Farms.

The statement alleges that since his imprisonment early last year, 36 false police cases have been registered against him. In March 2017, he was shifted to Sahiwal High Security prison and allegedly tortured. He is tied in chains, the statement alleged.

Asma Jehangir, renowned social activist, lawyer and former President of the Supreme Court Bar Association of Pakistan, is now arguing in the court for the rights of the imprisoned peasant leader.

After Lahore High Court rejected the plea to move back Mr. Sattar to an ordinary jail from the high security prison, the team approached the Supreme Court of Pakistan. On August 23, the case came up for hearing at the Supreme Court, where Asma detailed out the inhuman treatment meted out to the peasant leader in prison.

She pointed out that the decision to move Sattar to a high security prison, originally meant for convicted terrorists and extremists, is part of a conspiracy to criminalise the peasant movement and its leaders.

While arguing the case, the lawyer pointed out that without a judicial order, an under trial prisoner could not be shifted to another jail. Yet, in this case, an order from the Home secretary was used to move him and the court permission was sought much later. An administrative order is against the prison rule, the lawyer argued.

When the prosecutors argued that he was moved as part of a security procedure and accused that his court appearances always see large number of peasants in attendance, Asma Jehangir countered, “Yes when rich leaders appear in courts, no one objects about their followers turning up in large numbers, but a leader of the poor is not treated in the same way. Why?”

In an amusing turn of events, one of the presiding judges, after looking at the list of cases, sought clarification on whether Mr. Sattar was a socialist. The defendants lawyer argued that there were several socialists in the court room, and wondered how that was even relevant to the case!

She requested the Apex Court to demand that Sattar be produced in the court room, so that it can witness first hand his situation.

The court has asked the prosecution to submit all details and orders under which Sattar was moved to a high security prison. While adjourning the case for more hearing in September, it ordered immediate removal of chains and allowed Sattar’s wife and sister to meet him every fifteen days. It also granted permission to his lawyers Asma Jehanghir and Abid Saqi to meet Mehar Sattar in jail. However they did not shift him to Central Jail Sahiwal immediately as requested by the defendant’s lawyers.

The case would now be heard in Islamabad during September.

According to an article published by Herald in 2016, the land dispute in Okara initially erupted in 2000 when the management of the farms tried to change the terms and conditions of tenancy agreements. The tenants rejected the new agreements, dreading they would increase the cost of tenancy, would not offer them guaranteed tenure and would make it easier for the authorities to evict them from the lands their families have been cultivating for generations. A vast majority of them refused to sign the new lease agreements. They also fiercely resisted the military’s efforts to evict them from the lands. They then organised themselves as the AMP, under the desperate sounding slogan of maliki ya maut (give us land ownership or give us death). 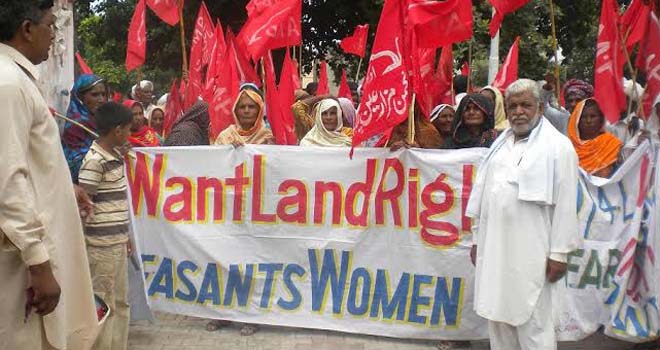 Suggested Reading on the issue:

Fight on for land

‘Cases against Okara farm tenants should be withdrawn’