Press release –  European Milk Board  and European Coordination Via Campesina

The report of the High Level Group on Milk (HLGM) that will be discussed today by the European Council of Agriculture Ministers cannot solve the milk crisis. European Coordination Via Campesina (ECVC) and European Milk Board (EMB) make one thing clear at their demonstration: fair prices for producers and supply management are needed. Representatives of development and environmental NGOs such as Oxfam Solidarity Belgique, Friends of the Earth Europe, Wervel, SOS Faim support their demands for fair prices for milk producers from North and South and a sustainable production. 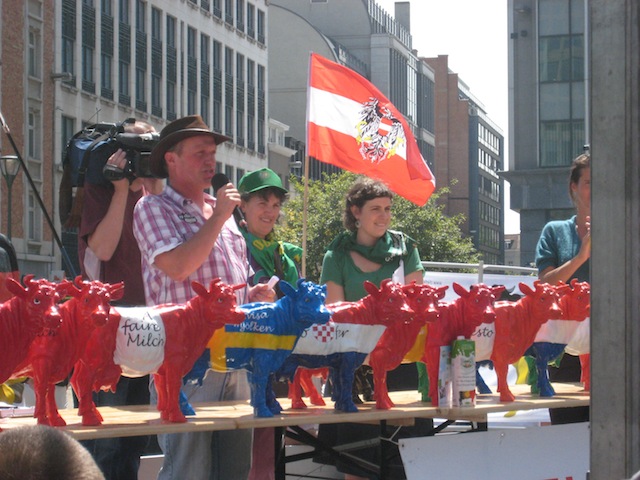 Brussels (12/07/10): Over one thousand milk producers from many European countries demonstrate in Brussels today against the proposals of the HLGM trying to avoid that they will influence the reform of the dairy market significantly. „These proposals do not yield a solution for the current crisis and will worsen the situation of European milk producers even further.” says Lidia Senra, board member of ECVC. Romuald Schaber, president of the EMB, adds: “The report says that the existing safety net was sufficient. That is, however, not true. The extremely low prices that we saw in 2009 can reoccur anytime and the existing measures cannot prevent it.” 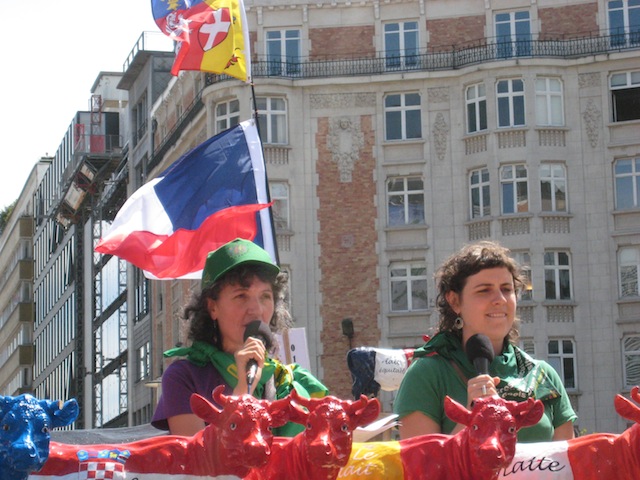 Another problem is the contractualisation – i.e. direct contracts between producers and dairies- that the HLGM has proposed. These contracts would lead the producers to be total dependent on the dairy industry, who, as stronger market player, would dictate the conditions.

Furthermore the proposals of the HLGM do not stipulate a regulation of the milk production. However, there will be no fair prices for producers without a regulation of the milk production and the dairy market. If to much milk is produced in Europe, this cheap milk floods not only our market and threatens the position of our producers on the market. The markets in developing countries are harmed as well. In many cases the local production is subsequently abandoned and poverty thus increases.

“The future lies in a demand-oriented production with cost-covering prices and a market where all players are capable of acting.” says Lidia Senra.

„One positive aspect of the report of the HLGM is that it clearly acknowledges that the milk producers are in a weak position on the dairy market” says Romuald Schaber.

The demonstrators from many European countries reject the short-sighted proposals of the HLGM. Several issues will have to be addressed again. The European Ministers for Agriculture are called upon to back a re-oriented dairy policy.