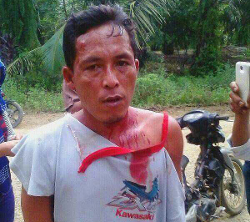 Over 1500 police personnel launched a despicable attack on peasant members of SPI (Indonesian Peasants’ Union), in Langkat District of North Sumatra Province of Indonesia and exterminated hundreds of acres of peasant land, so as to favour a foreign plantation companies. Several protesting peasants were severly injured in this brutal attack that took place on the 18th of November in Mekar Jaya village.

Suriono, from SPI Langkat explained, “Before the eviction and extermination, we asked the police to sit together and discuss this issue in the National Land Agency of Langkat District. But they refused it”. Suriono requested the large battalion of cops to leave the land as it would only frighten the peasants and local residents.

“But instead of going away and regardless of our the explanation, they continued bulldozing and leveling agricultural land and peasant’s housing,” he said.

“This brutality notwithstanding, police officers chased the peasants inside the village and Sadikun, a peasant member of SPI Mekar Jaya village was arrested by the police,” added Suriono. 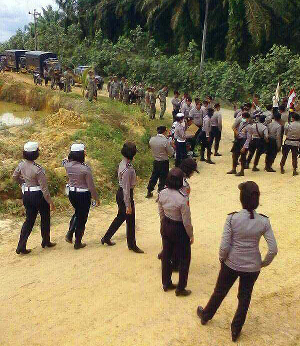 The eviction, carried with the help of large equipments contunued till the afternoon of 21st December. We were surrounded, unable to get out of the village, outsiders were not allowed to enter,” Suriono added.

Zubaidah (Chairman of SPI in North Sumatera Province) condemned the violent actions of the police. “There was no reason for the police, whatsoever, to resort to violence. There are several peaceful means to encourage the settlement of land conflicts, instead of violent land eviction and extermination. With this kind of situation, peasants are always the victims and perpetrators are often police officers, “said Zubaidah. Zubaidah explained, land conflicts that arise in langkat is triggered by intensified expansion of plantation companies abroad. 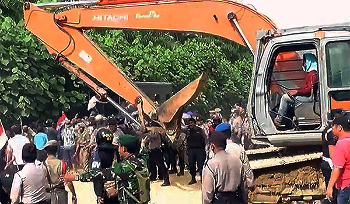 “This conflict was going on since 1998 against PTPN II (National Plantation Company). Ever since Langkat Nusantara Kepong (company from Malaysia)* took over the operational of PTPN II Kebun Lama Gohor, efforts by the company to evict peasants from the land has intensified,” Zubaidah added. “This conflict involves a land of ​​554 hectares, that were appropriated by PTPN II Kebun Gohor Lama,” she said again.

“What make us sad and hopeless, police and military force tend to support foreign companies, not the people themselves. This is clearly wrong. Just imagine, a village of 1,500 was surrounded by the police and army,” she said.

“The governor should be speeding up, doing something real to end this land conflict so there will be no more casualties. It can be started by revoking the license of the Langkat Nusantara Kepong Company. Furthermore, SPI members demanded that the North Sumatera Regional Police Chief take action against police officials who unleashed brutal attack on peasants in Mekar Jaya village, “No need to wait for the implementation of agrarian reform. It’s a must to so we can avoid another conflicts, that are always devastating to peasants,” concludes Zubaidah.

Watch the video of the attack here.