(August 24, 2018: Managua, Nicaragua) Over 30 La Via Campesina delegates and allies attending the face-to-face meeting of the international working collective on climate and environmental justice visited women’s cooperative, Gloria Quintanilla in Santa Julia, Municipality El Crucero. The Gloria Quintanilla – a member of LVC’s Association of Rural Workers (ATC) – run by about 22 women, is one of the most successful peasant cooperatives nationally recognized for agroecological production practices. Santa Julia has about 79 families, of which women form the core leadership of the community. 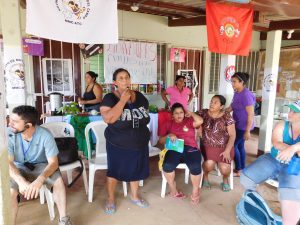 During the visit the delegates were welcomed by the leadership of the cooperative, three elderly women and two young women (one is the vice president who is 23 years old, the other is secretary, 29 years), clearly showing that the cooperative has a future and a plan for continuity through empowering the youth in what they refer to as “intergenerational renewal”. Before the delegates could view the farm, they had an opportunity to enjoy the coffee produced by the cooperative. They were also treated to a delicious traditional meal of tortillas, plantains, beans, yoghurt and cheese, all these produced by the cooperative.

Agrarian reform and diversified agroecosystems
The community is settled on the farmland that was owned by the former dictator of Nicaragua, Anastasio Somoza, who was defeated by Sandinista revolutionary movement. The community used to be part of the labour force of the coffee farm. The land was redistributed to the cooperative during the agrarian reform by the Sandinistas. 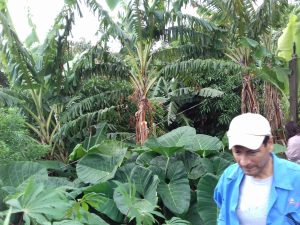 Before the agrarian reform, the farm grew only coffee with intensive chemical inputs. Now, the women have transformed the land and diversified crop production using agroecology. The cooperative has continued to grow coffee but also introduced over the last five years a variety of traditional food crops (bananas, plantains, cassava, yam, vegetables, maize etc.), whose seeds are produced locally, saved and exchanged with other peasant farmers. Santa Julia community faces water shortage during the dry season. The peasants have innovated ways of harvesting rainwater during the rainy season in underground tanks and pits and use it to water plants during the dry season.

The coffee is processed and packaged by the cooperative and sold directly to local markets. The exploitative intermediaries which used to buy the coffee beans no longer control the market and this has allowed the cooperative, not only to be innovative and engage in value addition but to bargain for better prices for the coffee at the market. 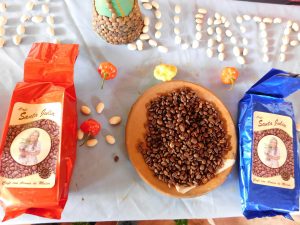 Training
The community has been receiving training to build self-sufficiency and food sovereignty to reduce poverty which increased during the implementation of the neoliberal policies before the Sandinista government returned to power.

The peasants attend training for four hours in the afternoon every Friday between April and December.  Carlos Marena, who works for a public institution for protection, who has been working with the Santa Julia community for 2 years helping them with establishing coffee production. The peasant school provides practical and technical training on coffee production, pest management, to processing (roasting) and marketing. The cooperative intends to start cocoa production.

The women have been trained to keep financial records, assembly records and have a saving account for the revolving fund for purchasing materials. They meet every last Sunday of the month to review the operations of the cooperative, including paying loans. Administration council is responsible for the operations and is accountable to the members. The council members are elected every three years.

Community development
The community also constructed two classrooms using their own resources. According to Lea Moirina Moncado, the Secretary of the cooperative, the classrooms were built to shame the then neoliberal government which neglected its responsibility to put up such structures in the community. “What we do is not only for the cooperative members. What we do is for the entire community,” said Lea.

The children use the classrooms in the morning. The women play a critical role at the school in teaching and passing on the indigenous knowledge to their children about the traditions and customs, including how to prepare traditional meals such tortillas, natural medicines (for example using guava syrup to control internal parasites, garlic for some infections etc) and their use. They have also been playing an important in recovering lost traditional practices.

“We are professors of natural medicines,” said Lola Ecquivel, the Treasurer of the cooperative.
The cooperative built accommodation facilities to generate extra income. According to Claudia Marceio Alvarado, the vice president, the cooperative had until recently been attracting visitors from United States of America and Canada. However, the tourists stopped coming due to the current political conflict caused by the western supported opposition.